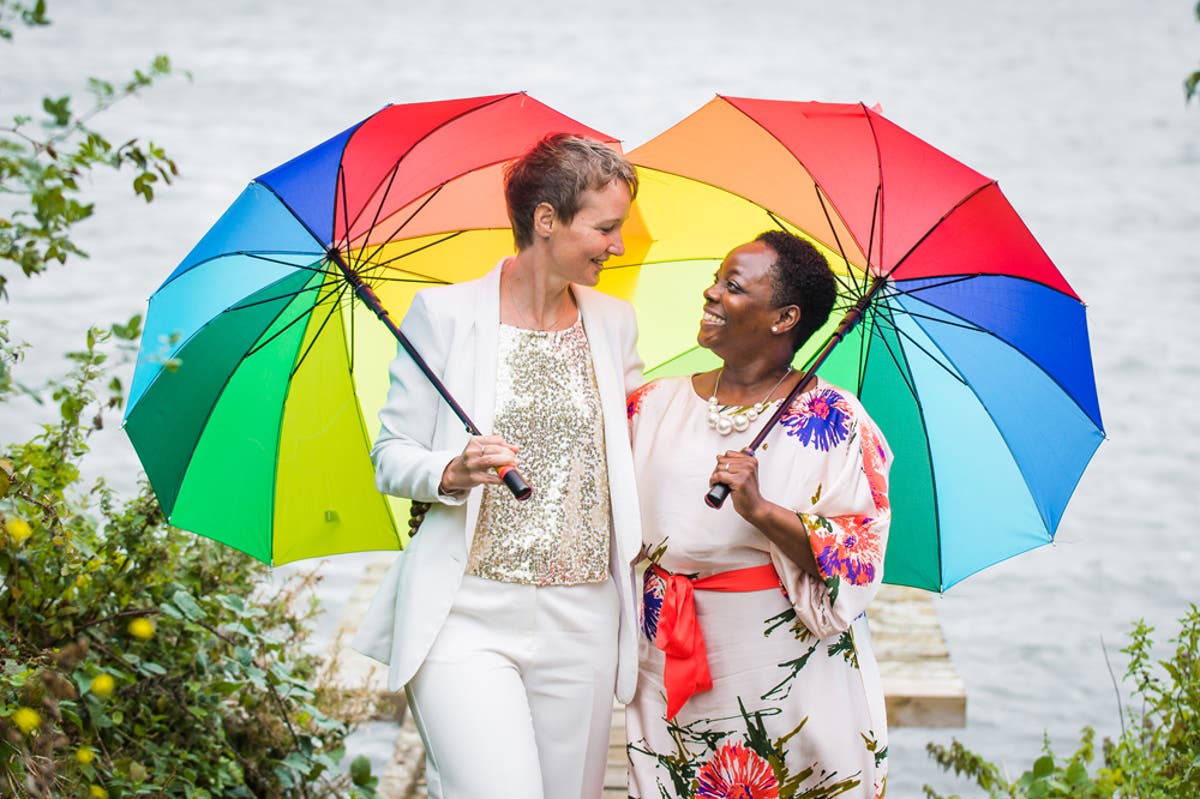 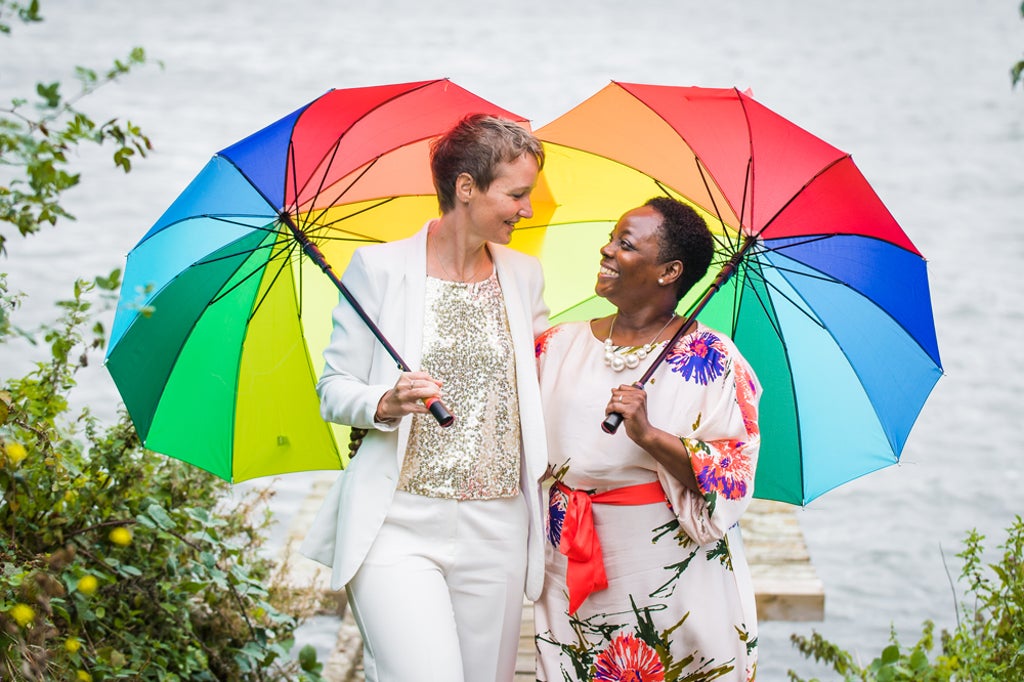 A sporty office worker who was struck down by nausea and exhaustion thought she had food poisoning when she lost two stone in a fortnight but discovered she had a rare cancer affecting just 345 people in the UK a year and had her left lung removed to save her life.

Keen hockey player and gym regular Karen Ruddock, 54, was the picture of health in March 2015 when her world came crashing down after a diagnosis of stage 4 thymoma – a cancer of the thymus gland behind the breastbone affecting less than one per cent of Brits each year, according to Cancer Research UK.

Given gruelling chemotherapy and radiotherapy, customer service assistant Karen, who lives in Walthamstow, east London, with her lecturer wife Heidrun Bien, 45, had her left lung removed in September 2021, after the cancer had “taken it over,” leaving it with just four per cent function.

She said: “This has been one hell of a rollercoaster. It’s made me realise that I’m quite resilient.

“We didn’t know how long I would be here for. We had no idea what my life expectancy was. It was a very scary time, as you’re just left in this big unknown.

“There wasn’t much information at all about my cancer, so it felt very isolating.”

She added: “Even now, we just take each day as it comes, as we love our home and we really enjoy our lives together.

“Now they’re going to monitor me for 10 years and I’ll have constant scans.

“I’ve always had an element of hope in me and I’ve tried not to think that this was going to be it for me, but I put my trust in the doctors.”

She added: “I want to have a good quality of life and make the most of now.”

Showing remarkable fortitude, Karen, who says she is now “in recovery” from the surgery, but still shielding because of high instances of Covid, is now keeping her spirits up with thoughts of a holiday with Heidrun when she is safe to go.

She said: “If we can, we would love to go to Thailand where we went once in 2014. We have always said we’d go back. And we’d love to try Jamaica, as we’ve never been.”

Karen, who says the cavity where her lung was fills with liquid and becomes “jelly like,” is now slowly regaining feeling in that area.

She is still astonished by the incredible work of her surgeons and the lengths they went to in order to save her life.

She said: “I can’t thank them enough, I actually thought I was inoperable and to be given that chance was incredible.”

She added: “I had the most amazing care at Guys Hospital, and they gave me the best support.

“They did exploratory surgery from the heart all the way down.

“All my internal organs were moved around and put back in. They were in the same place for 54 years, so it’s strange to think about that.”

She added: “For us, life still isn’t back to completely normal, but we hope later in the year we’ll be able to have a little break.”

Karen first noticed something was wrong in March 2015, as her weight dropped dramatically over two weeks from 10st 3.4lb to 8st 5lb, leading to her initial assumption that she had food poisoning.

She said: “As far as I was concerned, I was perfectly healthy and sporty. I played hockey for years and even started a hockey club.”

She added: “I used to go to the gym and work out, but I suddenly just felt very nauseous, couldn’t eat or drink and I progressively felt more tired.

“I’m one of those people who just thought it might pass. I thought maybe I had food poisoning.

“It was just very strange, but I decided to soldier on as I thought I’d get better.”

It was only when she looked in the mirror and saw her eyes were bright yellow with jaundice – caused by high levels of the bile pigment bilirubin – that her alarm bells rang and she saw her GP.

A series of routine blood tests followed, but nothing abnormal was detected and she was sent home.

Convinced she was unwell, Karen went to A&E at Whipps Cross Hospital in Leytonstone, east London, later that same day where she was rushed through for further tests and kept in for a month, so she could be monitored.

Karen said: “They took one look at me and just rushed me through, as I looked really bad, really unwell.

“It was quite scary to just suddenly be in hospital with this unknown illness, but I tried to stay upbeat as much as I could for my partner and my family.

“I just hoped that the doctors would come back telling me it was something that wasn’t too serious.”

But in April, following a scan of her liver, doctors spotted a shadow just under her left lung and further scans revealed she had stage 4 thymoma, which had metastasized and spread from her thymus to her left lung and chest.

The news was so shocking that her partner, Heidrun, fainted, according to Karen.

She said: “A doctor came to see me one day and just told me they thought I had cancer. My wife fainted.”

She added: “It was all just overwhelming.”

Following six rounds of chemotherapy between June and November and after the tumours had shrunk by a third, she had an eight-hour operation at London’s Guys Hospital in December 2015 to remove most of the growths.

Then, in 2016, she powered through 30 gruelling rounds of radiotherapy, which she described as being like a “full-time job,” as her treatments were on five days a week.

She said: “You get your weekend off so you can recover and then you’re back. It was like a job.

“I wanted to get back to some sort of normality, I took some time to recover, and I went back into working part-time.

“I tried to get on with life really.”

But scans in August 2017 revealed the tumours had grown and Karen was forced to have another five rounds of chemotherapy, which sadly were unsuccessful in shrinking the growths.

Realising the gravity of the situation, she was desperate to find a solution, saying: “The chemotherapy didn’t work. We had a conversation with the oncologist where they said they’d make me comfortable.

“And that’s when it really hit home that there were no options for me.”

In the summer of 2018, Karen was handed a glimmer of hope when she found out she was eligible for a chemotherapy trial but, sadly – despite their best efforts – while the chemotherapy slowed the growth they had to stop the treatment due to the side effects, as she was developing neuropathy.

She said: “I want to keep living for as long as I can, so I had to hope for a successful treatment.

“Luckily for me, they found a trial I was suitable for.”

She added: “I had side effects like neuropathy, or nerve problems, in my hands and feet and that could be quite extreme. After the first round that came on quite quickly.

“It helped to slow the growth of the cancer, but it didn’t stop it.”

Determined to find some light in an otherwise dark year, Karen and Heidrun, who met in 2011 in Rotterdam, Holland, at an LGBT sporting tournament where they were competing, got married in September 2018 at their local register office in front of her brother, chef Hugh Ruddock, 57, sister, teaching assistant June Ruddock, 59, and sister-in-law, accountant Michelle Ruddock, 52.

She said: “It was a beautiful day. It was very special.

“We didn’t know what my life expectancy was going to be, but it was so special and lovely to have my siblings there.

“Getting married was really important to us, especially under the circumstances. We just wanted to solidify our bond.”

Describing the seven years since her diagnosis as a “rollercoaster,” rather than moping, in 2018 Karen launched a charity, ThymicUK, to help other patients to cope and communicate with each other.

What started out as a support group with just six people, who spoke using social media, has grown and helped more than 200 people with the condition, which Karen says is her proudest achievement.

She said: “I feel proud of what we’ve done as a charity. It’s really brilliant to see how supportive and open people have been so they can help others.”

She added: “There’s so much anxiety when you’re newly diagnosed, and there’s so much unknown, but everyone is sharing their experiences at different stages.

“The most important thing is for patients to know they are not on their own.

“That feeling when you’re first diagnosed and having so little information, it can be devastating.”

She added: “I just want to give patients a voice.

“Having cancer is upsetting and distressing, but having a rare cancer and having to advocate for yourself and trying to find oncologists who have an understanding of it makes it doubly hard.”

Despite having just one lung, Karen has pledged to walk 100km in the month of May to raise funds for her charity.

She said: “I’m very lucky to have the support of my family, wife and friends, who have been accompanying me and continue to accompany me on my walks, it really means a lot to me.

“They will be with me every step of the way. And even those who haven’t been able to have supported us through donations – it’s been remarkable.

“I’ve raised so much more than we expected, so it’s amazing.”