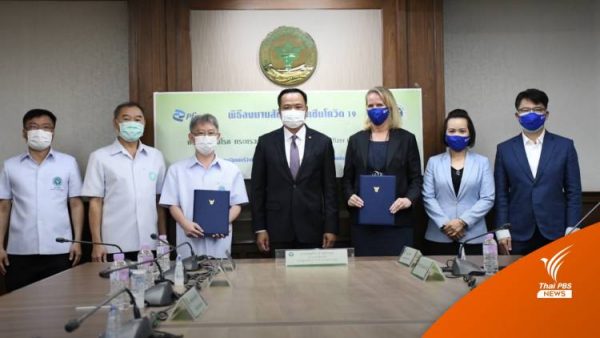 Thailand signed a deal to buy an additional 30 million doses of Pfizer mRNA vaccine from the United States yesterday (Thursday), to be used as booster shots.

The agreement was signed between Thailand’s Disease Control Department and the Pfizer Thailand and Indochina Company and was witnessed by Public Health Minister Anutin Charnvirakul.

Anutin said that the first batch of the 30 million doses being bought under the deal is expected to be delivered in the first quarter of next year and will be administered as booster shots.

He assured the public that there will be sufficient vaccines for next year, adding that there will be an additional 60 million doses of AstraZeneca and protein subunit vaccines, currently being developed by the Vaccine Research Centre of Chulalongkorn University and Baiya Phytopharm Company, adding that about 20 million doses of this vaccine will be held in reserve, when it becomes available following approval from the Thai Food and Drug Administration.

The minister said that the purchase agreement signed today carries a special condition, enabling Thailand to order an additional 20 million doses of Pfizer vaccine without the need for a down payment.

The additional vaccine will be administered next year to about five million children aged 5-11.