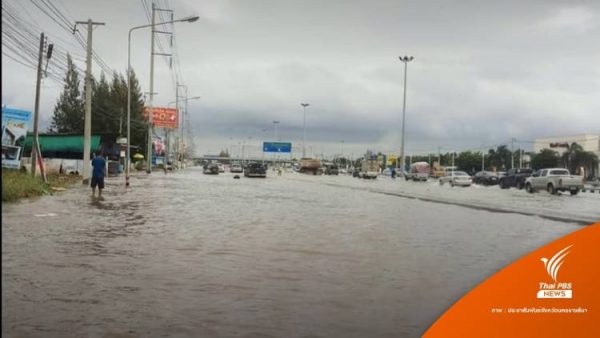 Overflow from the Lam Takhong River and runoff from Soong Nern and Kham Talay Sor districts have flooded the municipal area of Thailand’s north-eastern province of Nakhon Ratchasima for the second time in less than a month.

The bypass road, the main artery to the other north-eastern provinces, is so heavily flooded today (Tuesday) that small vehicles from Bangkok, heading for provinces via Nakhon Ratchasima, are advised to use an alternative route, by using the See Kiew elevated road toward Chok Chai district, and back onto the Friendship Road in Jor Hor district.

Conversely, vehicles heading for Bangkok through Nakhon Ratchasima are advised to use Sai Chor Road through Jor Hor heading towards Chok Chai district and onto the See Kiew elevated road.

Today, officials and workers helped in moving medical equipment from the ground floor to higher ground at Maharat Nakhin Ratchasima Hospital, as sand bags were used to build a flood wall to protect the hospital. Huge water pumps were also installed, in case the flood wall collapses.

Governor Wichian Chantharanothai, meanwhile, led officials and workers in evacuating people from heavily-flooded areas to safety and in helping to move their belongings to higher ground.

He said that an excessive volume of water from Soong Nern and Kham Talay Sor districts, due to heavy rains induced by the Kompasu storm last week, is pouring into the Lam Takhong River, which passes through the municipal area, instead of into the Boriboon River, because the sluice gate in Kok Kruat sub-district, which is supposed to divert the excess water into the Boriboon River, is flooded and has been rendered useless.