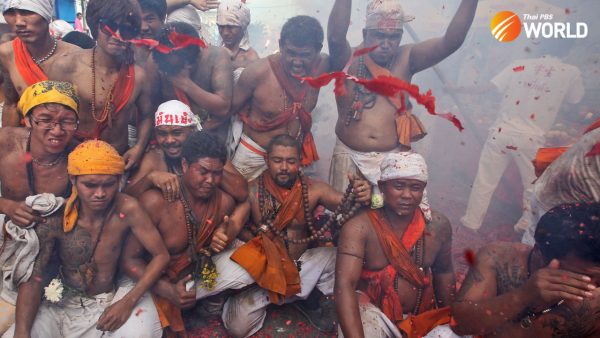 Believed to be the birthplace of the vegetarian festival in Thailand, Phuket has decided to hold its well-known and much-loved vegetarian or Je festival from October 5 to 15 this year despite the ongoing COVID-19 pandemic. As befits the situation, this time the celebration will be held in accordance with the “new normal manner.

That means putting the brakes on the usual spectacular displays of supernatural powers and some other activities. In addition, the festival is aimed at preserving the long-celebrated tradition rather than attracting tourists.

Bhummikitti Ruktaengam, President of the Phuket Tourist Association, told Thai PBS World that the Vegetarian Festival usually drew a large number of tourists to the island but that wouldn’t be happening this year.

“Phuket people have been celebrating the vegetarian festival for more than 100 years and it is good that we can maintain our tradition. Local people here, especially those of Chinese ancestry,  strictly adhere to a ‘Je’ diet and observe the precepts for the purposes of spiritual cleansing and merit-making. So this really helps boost morale,” Bhummikitti said.

He stressed however that the festival would not be as extensive as usual, as many activities have been removed to ensure the safety of the community during the pandemic.

Phuket Governor Narong Woonciew confirmed on Monday that the province will go ahead with the festival though it would be scaled down and, more importantly, all activities had to strictly conform to COVID-19 control measures.

Narong has given guidelines to all participants to follow in order to ensure the festival won’t cause any new COVID-19 clusters. “Most people think the show must go on. If we strictly follow the rules, it should be okay as about 70% of people here have received the 3rd booster jab,” said Michael Y., a long-time expat in the province’s tourism sector.

He added that most people also understood the situation. “We know there won’t be a full-scale festival. For example, they have cancelled the  famous food street where all the ‘Je’ food is usually sold.”

Apart from the food street,  the mediums’ supernatural parades, the so-called “Ma Song”, as well as acts that draw millions of tourists to Phuket such as walking barefoot over hot charcoals, tongue slashing and other sacred rituals will also be absent this year. The governor in his capacity as chairman of the provincial communicable disease committee has banned displays of supernatural power through mediums as well as flares or fireworks.

Each Chinese shrine has to limit the number of participants including mediums in ceremonies. The participants must be fully vaccinated and have negative results from the Antigen test one day before the festival starts. On the fifth day of festival, they will have to undergo another test.

People who enter the festival area including the shrines must have their temperature checked. Wearing a mask is a must.