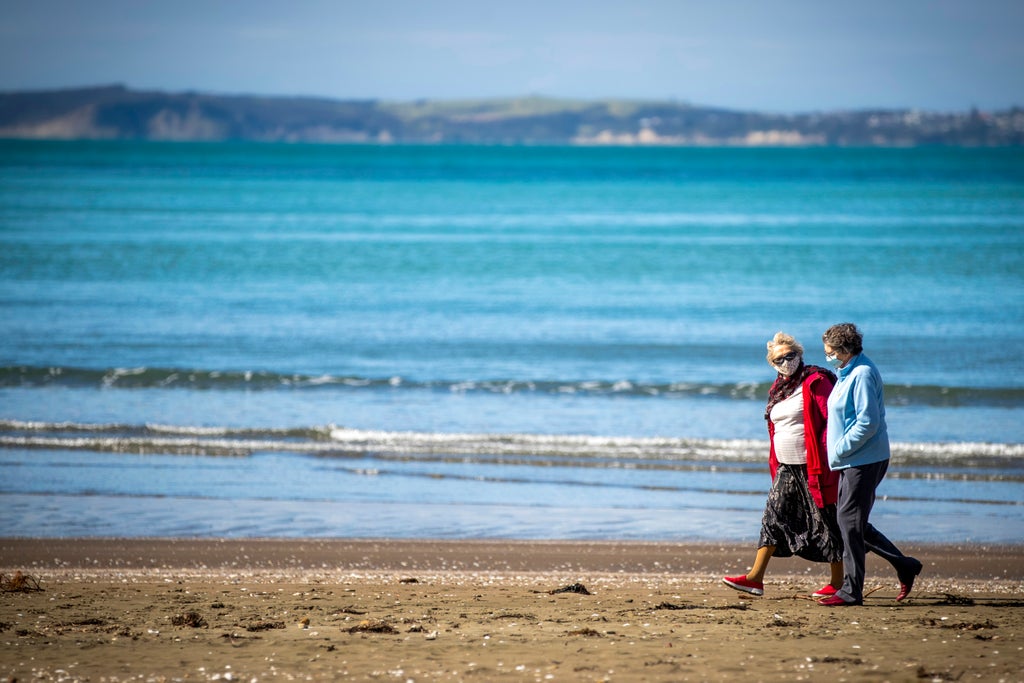 WELLINGTON, New Zealand — Most of New Zealand will move out of lockdown Tuesday except for the largest city of Auckland which will remain in the strictest type of lockdown until at least next week, the government announced Monday.

The nation has been battling an outbreak of the delta variant of the coronavirus since last month. All recent cases have been found in Auckland, including 20 that were found on Monday.

There have been a total of 821 cases found in the outbreak. The government is pursuing an unusual strategy of trying to eliminate the virus entirely.

MORE ON THE PANDEMIC:

— Hospitals in crisis in Mississippi, the least-vaccinated US state

— Want to attend Hamilton? Not unless you meet virus protocols

HERE’S WHAT ELSE IS HAPPENING:

JERUSALEM — Israel says it will soon reopen its gates to foreign tour groups — even as it battles one of the world’s highest rates of coronavirus infections.

The country’s Tourism Ministry on Sunday said it will begin allowing organized tour groups into the country beginning Sept. 19.

Tourists will have to be vaccinated against the coronavirus, present a negative PCR test before their flight and undergo both PCR and serological testing upon arrival. Visitors would have to quarantine in their hotels until the test results come back — a process expected to take no more than 24 hours.

Tourists from a handful of “red” countries with high infection rates — including Turkey and Brazil — will not be permitted to visit for the time being.

Israel launched a similar program in May after vaccinating most of its population early this year. But the program was suspended in August as the delta variant began to spread.

In recent weeks, the country has begun administering booster shots to anyone who was vaccinated over five months ago. The campaign has shown signs of controlling the delta outbreak, allowing the government to begin allowing tourists to return.

WASHINGTON — The U.S. government’s top infectious disease expert says he believes delivery of COVID-19 vaccine booster shots will be able to start Sept. 20 for Americans who received Pfizer doses, while Moderna’s may end up rolling out a couple weeks later.

Dr. Anthony Fauci told CBS’ “Face the Nation” Sunday that it is still the Biden administration’s plan “in some respects” to begin the third doses the week of Sept. 20, pending approval by the Food and Drug Administration.

The administration had hoped that both Pfizer and Moderna booster shots would be rolled out at that time. But Fauci said it is “conceivable” that for Moderna’s, there might be “at most a couple of weeks, a few weeks delay, if any,” while the company provides more data to the FDA on the booster’s efficacy.

President Joe Biden on Aug. 18 touted boosters as a protection against the virus’ more transmissible delta variant, and said Americans should consider getting a booster eight months after their second shot.

Ron Klain, Biden’s chief of staff, said Sunday the administration had always made clear that Sept. 20 was a target date, and “No one’s going to get boosters until the FDA says they’re approved.”

ROME — The Italian health minister has indicated that a meeting of his G-20 counterparts could yield a pledge about ensuring COVID-19 vaccines reach everyone in poor countries.

Minister Roberto Speranza told reporters on Sunday, after the opening session of the two-day meeting in Rome, that he hopes the gathering would yield a “pact” about the challenge to bring vaccines to everyone, including the more fragile” populations.

Speranza lamented that there is a deep gap between wealthier countries and poorer ones regarding vaccine distribution. He expressed optimism the Group of 20 nations’ gathering would result in resolve “so that the vaccine is the right of everybody and not just a privilege for few.”

Italy currently holds the rotating G-20 presidency. Speranza also held separate meetings with the health ministers of Britain, India and Russia. On the eve of the gathering Speranza tweeted that “only by working together can we guarantee a fairer distribution of COVID-19 vaccines.”

LONDON — Britain’s government has confirmed that it plans to introduce vaccine passports for nightclubs and large-scale gatherings from next month.

Vaccines minister Nadhim Zahawi said Sunday that officials are looking to begin the certification measures from the end of September, when the whole over-18 population would have been offered two COVID-19 vaccine doses.

Zahawi told Sky News that this was the “right thing to do” to ensure the economy remains open. Lawmakers and businesses, however, have criticized the measure as divisive and say they could embroil nightclubs in discrimination cases.

“The best thing to do is to work with the industry to make sure that they can open safely and sustainably in the long term, and the best way to do that is to check vaccine status,” he said.

The plans mean that people who want to enter nightclubs and other large-scale events will be required to show proof they have had two doses of a coronavirus vaccine.

Scottish leader Nicola Sturgeon said earlier this week vaccine passports will be required for nightclubs and large events from later this month as Scotland faces a spike in infections.

DUBAI, United Arab Emirates — The kingdom of Bahrain has authorized a third booster shot of Russia’s Sputnik V coronavirus vaccine for anyone above the age of 18 who received their second dose at least six months ago.

The country’s coronavirus taskforce is encouraging residents who received the Sputnik jab to register for the extra dose. Already, the government has rolled out Pfizer-BioNTech booster shots to people six months after they received two shots of China’s Sinopharm vaccine.

The Mideast island nation is one of the world’s leaders in per-capita inoculations, largely relying on the Sinopharm shot. Daily infections in the country of 1.6 million have sharply declined from peaks reached a few months ago and now hover around 100 new cases per day.

The country, which has recorded over 272,900 infections, is also producing the Sputnik V vaccine to supply demand across the Middle East and North Africa.