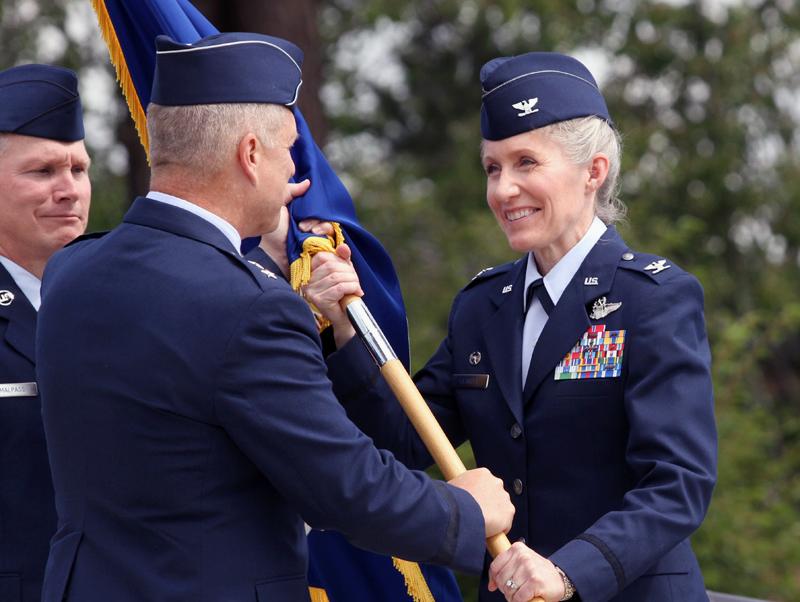 The first female commander of the 57th Wing at the Air Force.

In a historic ceremony on April 15, 2016 at Nellis Air Force Base in Las Vegas, NV, Brigadier General Jeannie M. Leavitt took command of the 57th Wing, she is the wing’s first female commander and highest-ranking female officer to command at Nellis.
She replaces Brigadier General Christopher Short, who has moved onto his new assignment as senior defense official and attache to the United Kingdom for the Defense Intelligence Agency at the U.S. Embassy in London.
Brigadier General Leavitt became the Air Force’s first female fighter pilot in 1993 and went on to pilot combat missions over Afghanistan and Iraq.
Prior to taking command of the 57th Wing, she served as principal military assistant to Secretary of Defense Ashton Carter at the Pentagon.
The 57th is the Air Force’s largest composite wing. It manages all flying operations at Nellis, including Red Flag and Green Flag air combat training exercises. It also runs the graduate-level U.S. Air Force Weapons School, oversees the world-renowned Thunderbirds air demonstration team, and supports the Air Force Warfare Center’s test-and-evaluation activities.
Leavitt said she knows the 57th Wing has financial constraints, but she hopes to overcome those hurdles.
This is a big highlight for Nellis Air Force Base, Brigadier General Jeannie M. Leavitt has made history and paved a path for women in the military.