Thailand is a country with the most diverse attractions. Among its multifaceted charms are the many amazing National Parks. When you visit this beautiful country, you should make sure to catch a visit to at least a couple of its National Parks, which make for a good contrast to the more developed areas in the cities and towns. A visit to these parks offers you a unique chance to experience the beauty of Thailand’s unspoiled wilderness and wildlife. The following are just some of the most incredible National Parks in the ‘Land of Smiles’. 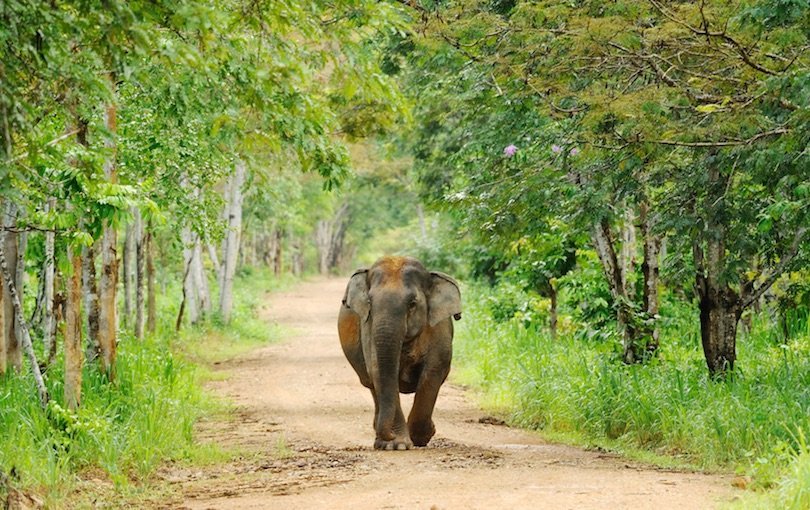 Located in the Prachuap Khiri Khan province, the Kui Buri National Park is one of the best wildlife viewing destinations in Thailand. You can find herds of elephants bathing at the watering ponds near Pa Yang substation. While all visitors are allowed to take to their cars in the park, it is necessary to take a guided tour to explore the protected areas of the park. You can rent tents or bungalows if you want to stay overnight. If you come here between May and November, you should expect lots of rain, whereas the driest months are usually June and July. 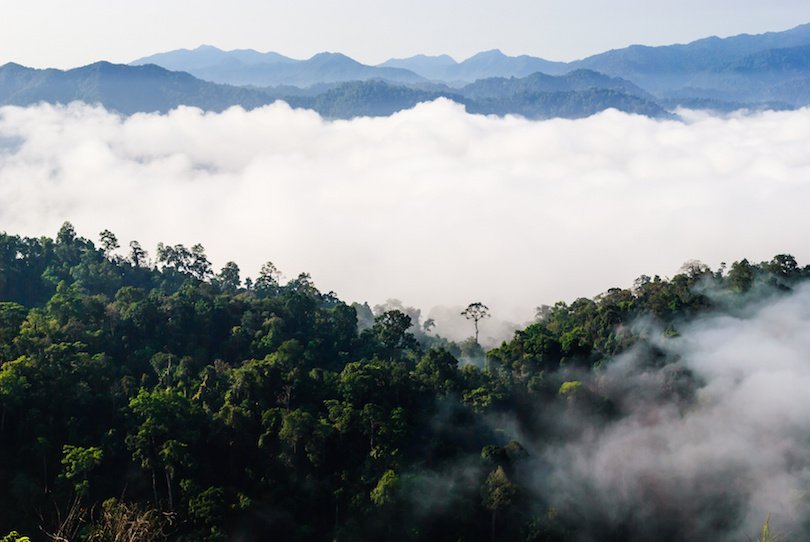 Kaeng Krachan is Thailand’s largest national park and is in the Phetchaburi province. The park is mostly a rainforest and one of its unique attractions is the morning mist that covers the park making its hilltops visible only above mist clouds during the months of December – March, creating a splendid view. The park is also known for its diverse wildlife, especially birds and butterflies. There are more than 40 species of birds that have been identified including species like giant pitta, great argus and woolly-necked storks. The park is an exciting destination with activities including hiking through forests, bird watching, boating or scaling one of the park’s tall peaks. 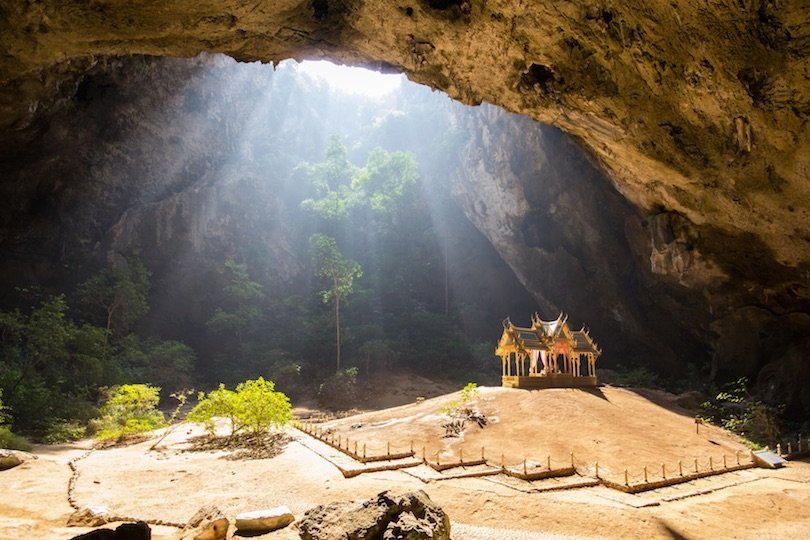 This national park, which is in Prachuap Khiri Khan Province, is notable for its limestone hills. The name of the park means “mountain with 300 peaks.” The visitors come here to see Phraya Nakhon Cave, a large cave with a Buddhist temple inside. The park is also a popular destination for bird watchers, and you can see some 300 species of birds here. January and February is especially good for observing migratory birds. If you are in Hua Hin, a visit here is easy to arrange as it is only a day’s trip to Khao Sam Roi Yot National Park. 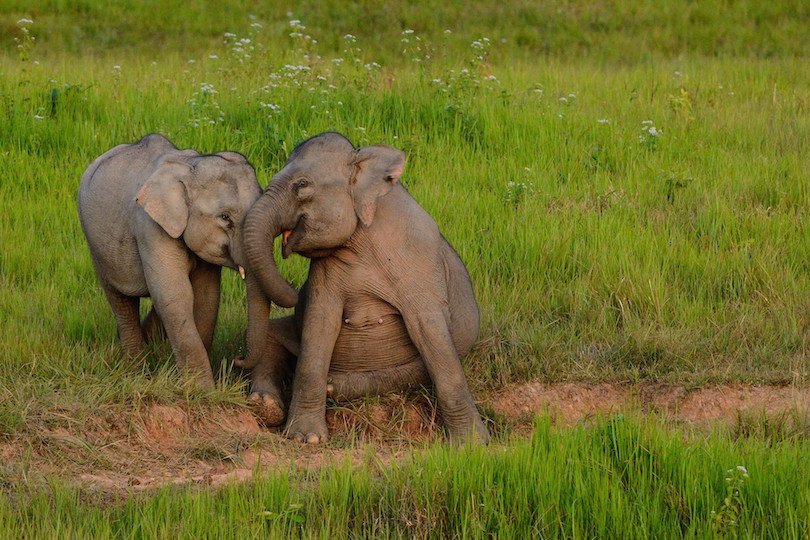 Khao Yai National Park, which is located in central Thailand, was created in 1962 as the first national park in Thailand. This park is a popular destination for hikers and mountain climbers especially since it is situated in the Sankamphaeng Mountain Range. The park is also appealing to wildlife lovers. Some of the species you’re likely to see here include gibbons, leopards, monkeys and elephants. Although now rare, it is even possible to spot a tiger. You can also find many waterfalls in the park, the largest being Haew Narok. 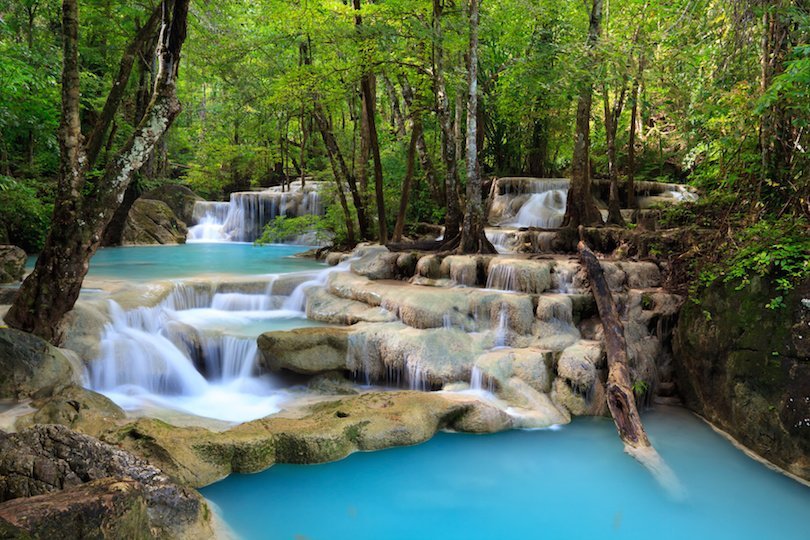 Erawan National Park is in western Thailand, in the Kanchanaburi Province. One of the major attractions is the Erawan Falls, a seven- tiered waterfall named after an elephant from Hindu mythology. You can even climb these waterfalls and bathe in the pools. This park also has several caves that you can explore. The easiest way to reach the park is to take a bus from Kanchanaburi, which takes about an hour and a half. If you want to spend more than a day at Erawan National Park, you can camp out or rent a bungalow. 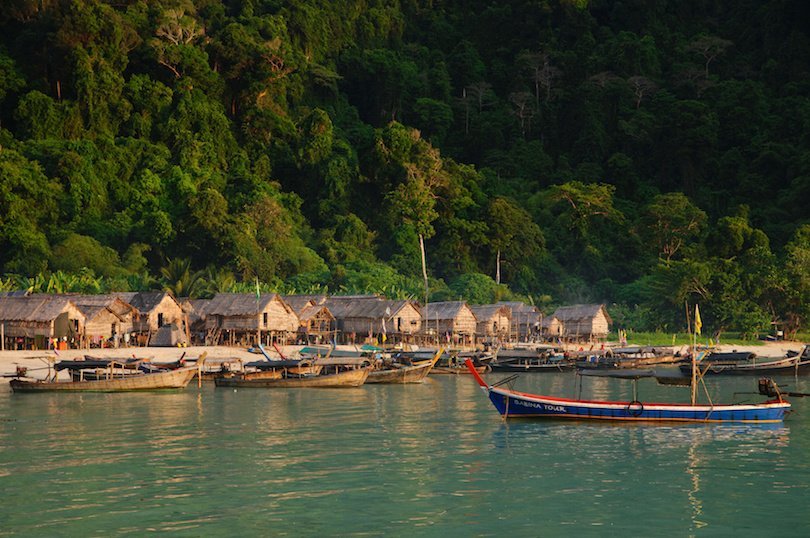 Mu Ko Surin are a protected group of islands in the Andaman Sea, 60km (37 miles) from the mainland. These islands have many snorkelling and diving spots like Richelieu Rock, stunning coral reefs and many species of fishes, sea turtles and other marine life. You could also get a bungalow for rent at some of the Islands here. Mu Ko Surin National Park is the ideal destination if you want to spend time relaxing on the beach or snorkelling. 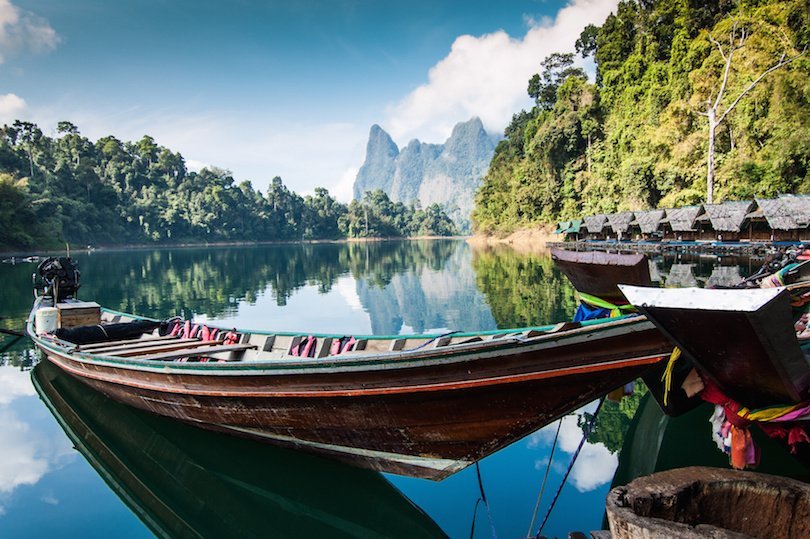 This national park, located in the Surat Thani Province, consists mainly of rainforest and jungle. It’s the rainiest spot in Thailand, which facilitates the wide diversity of flora and fauna in this area. The park has wildcats, deer, tapirs, elephants and boars. You can also find one of the world’s largest flowers here, the increasingly rare Rafflesia kerrii, which, in Thailand, blooms only in Khao Sok. The best time to visit here is in the dry season, between June and October. April to June is the monsoon season, when flooding is common and many trails are slippery. 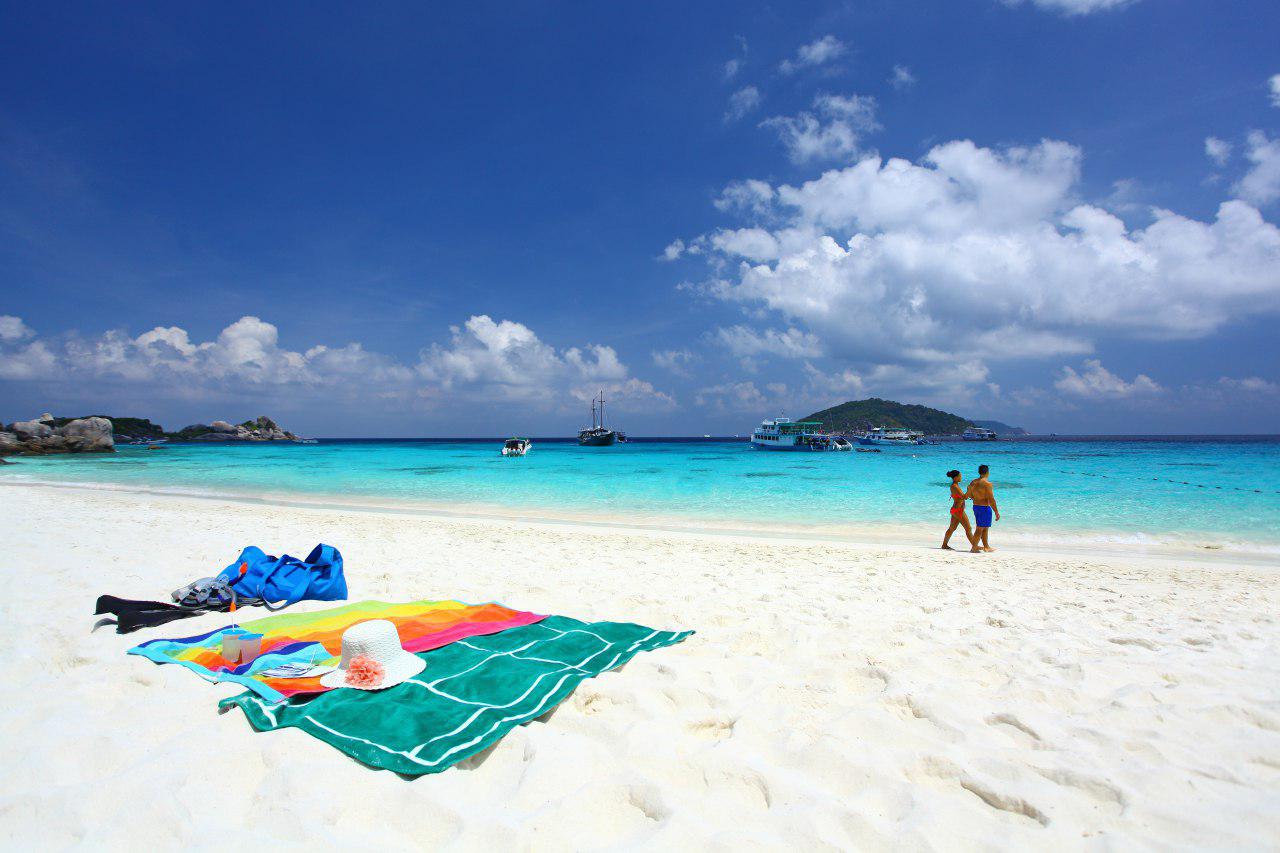 Another one of Thailand’s marine parks is Mu Ko Similan National Park, an archipelago of 11 islands about 70 km (43 miles) off the West coast in the Andaman Sea. These granite islands are as beautiful above the water as below, topped with rainforest, surrounded with white beaches and fringed by coral reefs. Between December and April, the waters are very clear, making it a good time for snorkelling and diving. 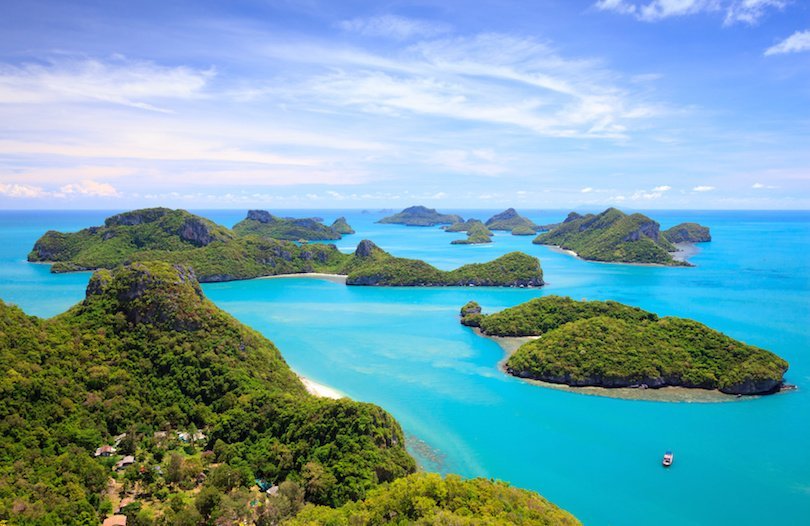 Mu Ko Ang Thong National Park, in the Gulf of Thailand, is a marine national park consisting of 42 islands. Speedboats and kayaks are both popular here; it’s best to rent a boat to see this park. There are many spots that are good for snorkelling and diving. If you are looking to extend your stay for a more than a day, then you can rent tents or bungalows. Several islands have beautiful white sand beaches, while others have mountains where you can hike and enjoy splendid views at the top. 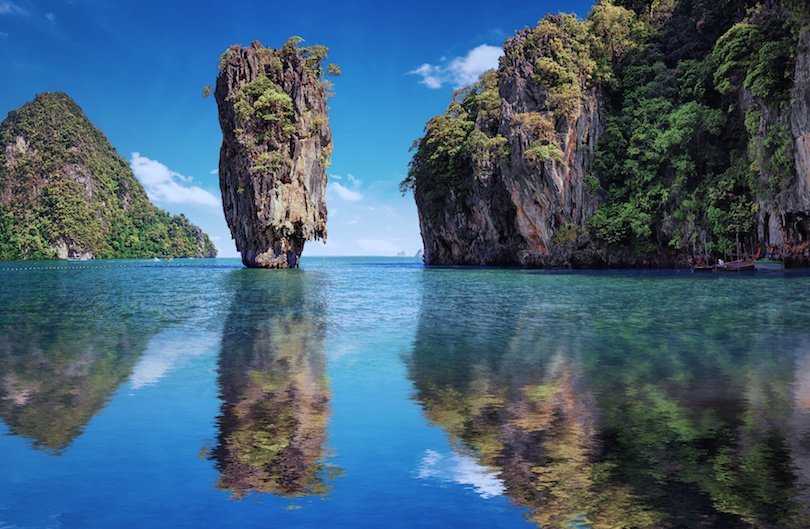 Ao Phang Nga National Park is a marine park which is situated in the South of Thailand, in the Phang Nga Province. The most popular spot is James Bond Island, given this name after part of the movie, ‘The Man with the Golden Gun’ was filmed here. The park offers quite a few things to explore so it would be nice to spend at least a few days here, exploring the number of beautiful beaches, dramatic limestone cliffs, caves and lagoons.