Prime Minister Gen Prayut Chan-o-cha said he wouldn’t halt the resignation of permanent secretary of Finance Somchai Sujjapongse after he was transferred and appointed secretary-general of the National Economic and Social Development Board (NESDB) yesterday. 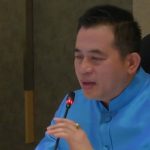 Gen Prayut made clear of his stance on the transfer of Mr Somchai to new position at the NESDB, saying being a civil servant, he couldn’t express dissatisfaction.

He said everything has been considered and done in accordance with official regulations.

He said it would be alright if the resignation was based on his personal reasons, and he would not halt his resignation.

Gen Prayut insisted that this would not cause rift in the government, and said he was determined and stood firm on his position.

However he said anyone else wishing to resign could go ahead.

He dismissed suggestion of rift in the government, saying if it would be rift, it was something that was triggered by the media people.

Somchai’s resignation from the civil service was seen as a form of protest Tuesday after he was transferred to the position as secretary-general of the National Economic and Social Development Board.