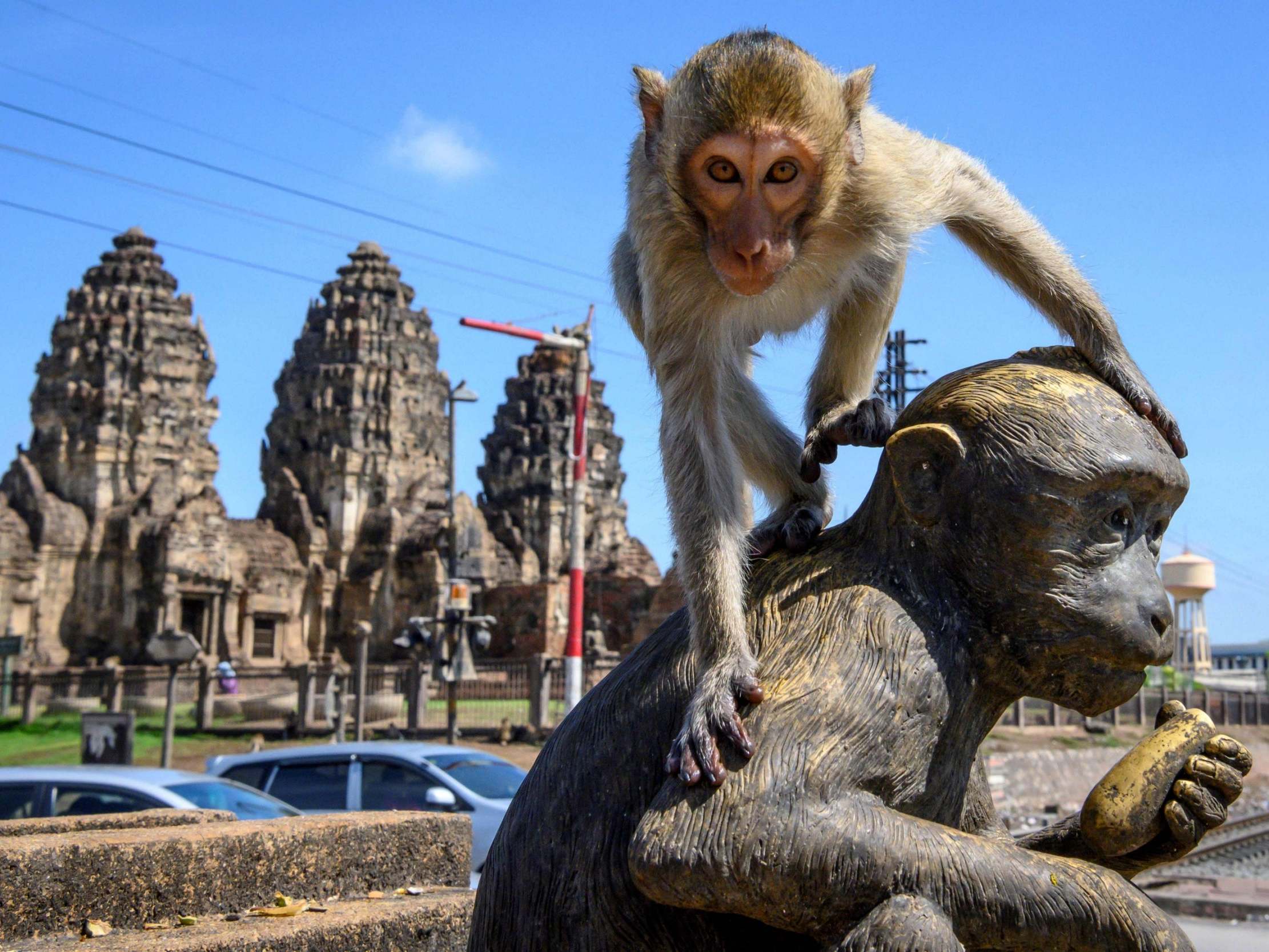 The customers waiting outside a bank in Lopburi, Thailand, left their jewellery at home and kept other treasures out of sight. But danger lurked anyway.

In broad daylight, they watched a thief steal an iced tea and a vandal brazenly attack a motorcycle seat. One woman quit her place in the line, when a stalker crept up and threatened to bite her.

With a sigh, a police officer brandished a slingshot, and the monkeys scattered. Less than a minute later, they were back.

Lopburi, a onetime capital of a Siamese kingdom and a repository of ancient architecture, is a city under siege. Crab-eating macaques, a Southeast Asian species with piercing eyes and curious natures, have spilled out of the temples where they were once revered and taken over the heart of the old town.

Their growing population, at least 8,400 in the area with most concentrated in a few city blocks, has decimated parts of the local economy. With territorial troupes of macaques roaming the neighbourhood, dozens of businesses — including a music school, gold shop, barber, cellphone store and movie theatre — have been forced to close in recent years.

The coronavirus pandemic has added to the chaos. The frolicking monkeys drew droves of tourists as well as Buddhist faithful, who believe feeding the animals is a meritorious deed. Their favourite offerings included coconut yoghurt, strawberry soda and brightly coloured snack packs. Now the macaques don’t understand where that source of sustenance has gone. And they are hungry.

Over the years, the monkeys moved into abandoned buildings, trashing display cases and rattling the bars installed to keep them out. Unless security guards are vigilant, they rip antennas and windshield wipers off parked cars.

Dangling earrings, sunglasses and plastic bags that look like they may have food in them are irresistible to the monkeys. And in the areas of the city most densely packed with the animals, many residents live in fear of the next sneak attack.

But in a Buddhist-majority culture in which culling monkeys would disturb spiritual sensibilities, local officials and residents have few options to fend off the gangs of macaques. Besides, in the past, the monkeys drew tourists to Lopburi. Without them, the economy might suffer even more.

At a hardware store across the street from the ruins of a 13th-century Hindu temple, oversized stuffed animals in the shape of crocodiles and tigers peer out at the street where the monkey traffic outpaces that of pedestrians. The plush toys were meant to scare away the monkeys and it worked for a couple months. But the macaques soon figured out that they weren’t real, said Yupa Srisanguan, the shop owner.

“It has never been this bad,” Ms Srisanguan said, as a young male macaque wandered into her store, intent on chewing the loops of rubber hose hanging from the ceiling. “We’re not against the monkeys, but it’s difficult when people are afraid of being bitten when they come to our store.”

When she was a little girl, Ms Srisanguan, 70, said, the monkeys were fewer, bigger and healthier, their fur shiny and thick. They kept to the temples, as well as the ruins of the ancient Khmer civilization that once held sway over this part of central Thailand.

But with an influx of monkey-enchanted visitors, some foreign, came an easy and often unhealthy source of food. Along with bananas and citrus, the macaques feasted on junk. Their fur thinned. Some went bald. Without having to worry about their next meal, the monkeys, which can give birth twice a year, had more time for other pursuits. The population exploded.

Compared with the monkeys of the forest, their urban counterparts have less muscle and are more susceptible to hypertension and blood disease, said Narongporn Doodduem, the director of a regional office of the Wildlife Conservation Department.

“The monkeys are never hungry,” he said, “just like children who eat too much KFC.”

As traffic recently piled up at a light in old town Lopburi, Nirad Pholngeun, a police officer, kept his slingshot at the ready. He has been stationed at this street corner for five years and has watched the growing monkey population with alarm.

A truck, presumably from out of town, idled at the light, its flatbed filled with crates of fruit for the market. A monkey spotted the produce, wove through the traffic, leapt onto the truck and held aloft a juicy dragon fruit. The one expeditionary macaque drew dozens more. By the time the light turned green, the crates were cleared and the gorging began.

Throughout the mayhem, Mr Pholngeun raised his slingshot but there was little a police officer could do against so many macaques. His battle tactic was a charade anyway. The slingshot held no projectiles.

“It’s hopeless,” he said. “Within a blink of an eye there are more monkeys. So many babies.”

Local wildlife officials have begun sterilising the monkeys en masse to control their numbers. More than 300 animals underwent surgery last month, and 200 more will be sterilised in August.

Capturing the monkeys for the operations is a major undertaking, said Mr Doodduem, the wildlife official. On the first day of the June campaign, the monkey catchers wore camouflage-printed uniforms and lured the animals into cages with food. But by the second day, the monkeys knew to avoid them. The monkey catchers had to switch to wearing shorts and floral shirts, pretending they were holidaymakers.

“The monkeys are smart,” Mr Doodduem said. “They remember.”

With the coronavirus dissuading many tourists and Buddhist pilgrims from visiting Lopburi, local residents have taken to feeding the monkeys themselves.

“We can’t let them starve,” said Itiphat Tansitikulphati, the owner of the Muang Thong Hotel.

Every day, an old female monkey calls on his hotel, waiting politely for her meal to be served. Banana cake is her favourite, but plain fruit will do, too.

“A long time ago, a lot of Lopburi was forest so we are taking the land from the monkeys,” Mr Tansitikulphati said.

A third generation hotelier, he has relinquished the top floor to the monkeys, who have wrecked it with the zeal of drunken party-goers, ripping up wooden planks and shredding corrugated metal.

An electric fence protects the ground floor of the hotel. But even before the coronavirus hit, visitors, many of whom were travelling businesspeople, were scared off by the marauding monkeys, Mr Tansitikulphati said. His hotel barely survives.

“The balance between humans and monkeys is off,” he said. “It hurts business.”