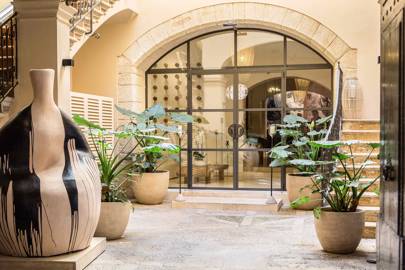 Best for: a chef’s table experience

Launched in 2016 in a lowly, disused workshop at the back of acclaimed local chef Santi Taura’s eatery in LLoseta, this place immediately made a din. More than a chef’s table, it was a clandestine restaurant-within-a-restaurant with a curated tasting menu for only 16 privileged guests. It was also an elite lesson in Mallorca’s past for studious palates (and those patient enough to contend with a six-month waiting list), served up on earthenware as rustic as archaeological relics. Taura researched historical island dishes, tracing and resurrecting their Roman, Arabic, Christian and Jewish roots, then rearranged them into 13-plus intricate offerings: interpretations, say, of red-mullet pie and Mallorcan lentils with red shrimp. Provenance was double-underlined: his signature dish, made according to an 18th-century recipe for stuffed sea snails, used ecological gastropods from a farm in Muro. Now Dins has moved to the El Llorenç hotel in the old town’s La Calatrava area, once both the Jewish quarter and the heart of the medieval caliphate. Today, Taura’s 16 pupils sit in a semi-circular bar in front of the tiled kitchen awaiting their history master’s nightly revelations. Beware – class is often fully booked.