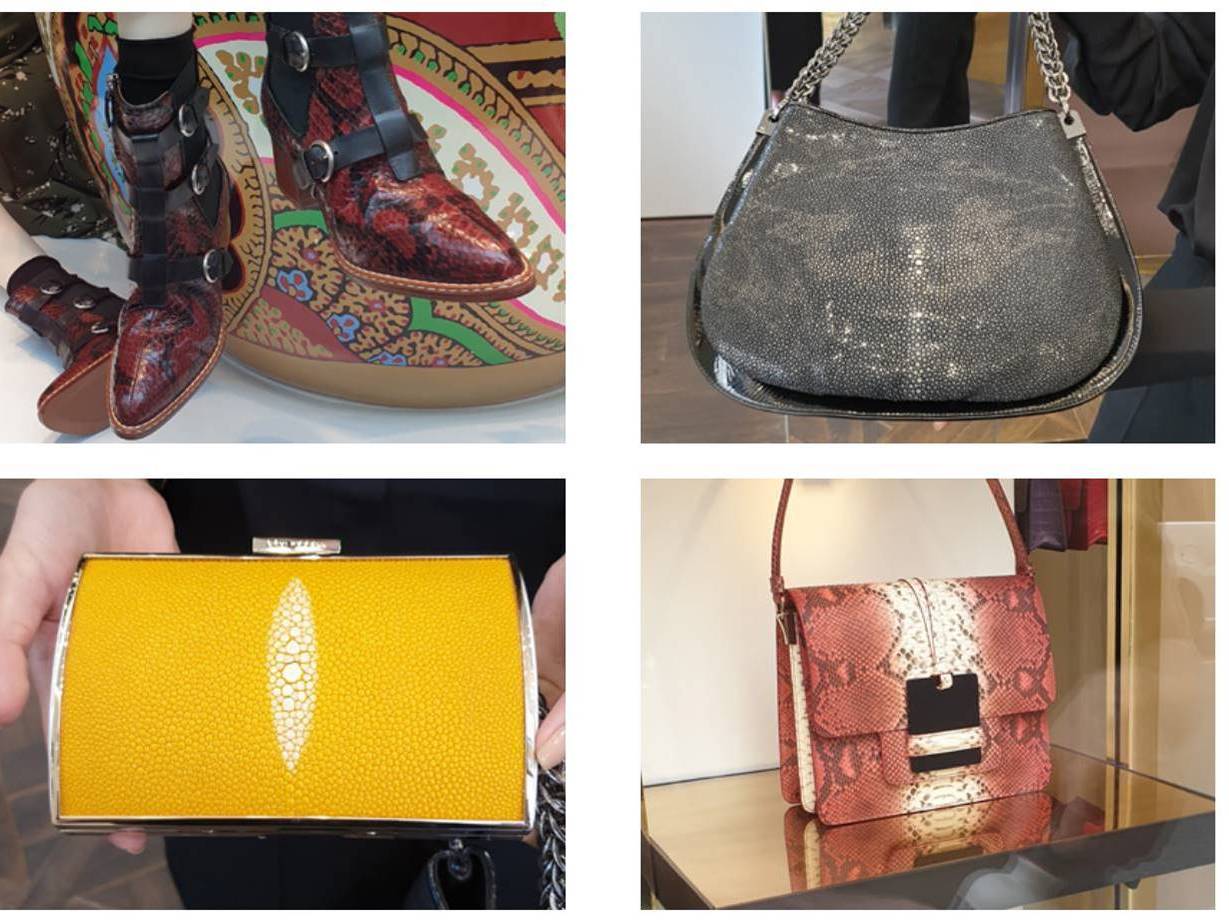 An international trade in skins of “exotic” species such as pythons, stingrays and crocodiles for luxury fashion accessories such as bags and boots increases the risk of dangerous viruses spreading to humans, conservationists are warning.

Goods such as shoes, handbags and clothing made of wildlife parts are openly sold in designer shops in European cities such as Milan, as well as online.

With the spread of the Covid-19 pandemic, a global clamour has arisen for the World Health Organisation to push to ban wet markets, where the slaughter of animals in insanitary conditions, like in Wuhan, China, is strongly thought to have given rise to the virus.

But conservation experts say the demand for leather from species such as crocodiles, alligators, snakes and marine life is fuelling the meat trade in street markets across Southeast Asia and Africa, so helping such places to thrive.

While many animals are captured from the wild, large numbers are also bred specifically for the market in exotic meat and body parts, at thousands of sites across Asia that are just as cramped and unhygienic as the markets where they are sold.

China brought in a temporary ban on open-air wet meat markets in February, and there are signs the ban may be made permanent. But such places remain common in other Asian countries including Indonesia and Thailand, as well as Africa and South America.

The Australia-based Nature Needs More campaign group discovered “luxury” accessories including boots made of python skin and crocodile handbags in upmarket stores in Milan. The leather is part of the dangerous industry selling “exotic” meat at roadside stalls and wet markets, the organisation says.

Some British designer stores and websites sell sandals, belts and gloves made of the pelts of alligators, lizards and even deer. On eBay a Thai trader is selling a “100 per cent stingray leather” briefcase for offers of around £481.

A “real python leather” coat can be found elsewhere for more than £7,600.

The trade in skins for fashion accessories is legal, but experts say viruses do not distinguish between legal and illegal trade.

According to the World Association for Animal Health more than 70 per cent of emerging infectious diseases in humans are zoonoses – those that cross from animals to people.

The Worldwide Fund for Nature says wildlife trade is the second-biggest direct threat to species survival, after habitat destruction.

Lynn Johnson, founder of Nature Needs More, told The Independent: “The risks involved aren’t only about wet markets, they are also about legal captive breeding facilities.

“Before Covid-19 few people would have known about China’s 22,000 legal captive breeding facilities. These facilities are the source of product to the apparel, meat and medicine industries.

“Any industry that involves humans handling – not just consumption of – exotic animals poses a risk of animal-to-human transmission for a newly evolved virus. Also, it does not matter what these facilities breed for – meat or skin; if they are close to areas where bats live, for example, the chain of transmission can happen again. Humans handling the animals is enough for transmission.”

Pythons, she said, are legally and illegally harvested from the wild in Asia, and also captive-bred, with 96 per cent of skins going to the European fashion market. When the organisation investigated, sales assistants for the luxury fashion brands buying them said the skins were a “by-product” of the meat industry, claiming it was sustainable.

In 2016 a European parliament report revealed the world’s wildlife trade was “one of the most lucrative in the world”. “The legal trade into the EU alone is worth €100bn [£88bn] annually, while the global illegal wildlife trade is estimated to be worth between €8bn and €20bn annually,” it said.

It’s thought demand for “luxury” goods has risen further still since then, with one upmarket company reporting the market grew by 5 per cent in 2018.

“While the world is talking about wet markets in China and throughout Asia, it is avoiding seeing this as an issue of legal global trade.

“If these captive breeding facilities stay open who will pay for monitoring to ensure meat doesn’t make its way into the food chain, if eating such meat is banned?”

Mark Jones, of Born Free, a trained vet, said: “Any trade in wild animals carries a risk to people. It might be argued that the wet markets carry the highest risk because of the numbers and range of animals traded and the poor welfare and hygiene conditions. Nevertheless, the risk of, for example, salmonellosis from the reptile trade has long been acknowledged, and there are restrictions on such trade in a number of countries for this reason.

“The likes of salmonellosis doesn’t make the headlines because it tends to have a localised impact on the people who are in direct contact with the animals, and doesn’t spread rapidly or widely in the way that, say, influenza or coronaviruses can.

“But it remains a risk, and there are other potentially much more impactful pathogens that could be spread by the trade in live animals as exotic pets.

Nature Needs More is lobbying for the Convention on International Trade in Endangered Species (Cites) to update its system of paper permits – which Ms Johnson says is rife with abuse and corruption – to an electronic one.

Last month a report by wildlife-protection organisation Traffic on how the Cites system is abused said: “This system gives rise to numerous possibilities for corrupt practice, both when documents are issued and upon inspection at border crossings.”

It recommended, among other steps:

The Independent has launched a campaign for an international effort by governments to curb the wildlife trade to reduce our risk of future pandemics. Pressure is mounting on China, seen as an incubator of Covid-19, with many observers calling for the country to face financial penalties.