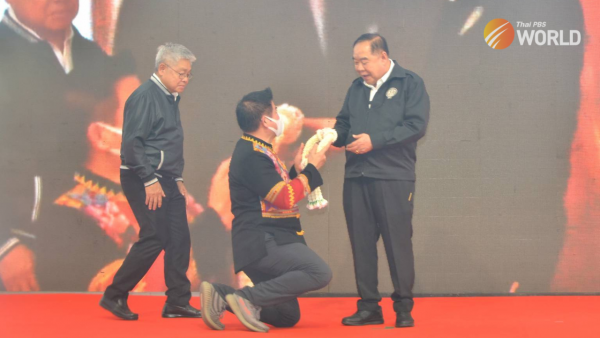 Many were surprised to see master powerbroker Thammanat Prompow kneeling on stage to present a garland to Palang Pracharath leader General Prawit Wongsuwan, in a symbolic apology and show of remorse. But analysts say it was just a political show aimed at legitimizing his imminent return to the ruling party.

The January 16 event in Thammanat’s northern constituency of Phayao saw Palang Pracharath deputy leader Wirach Ratanasate welcome Thammanat and announce that “the father is very happy that his son has returned home.”

Thammanat responded by saying he was ready to follow Prawit’s orders, also promising to help him become the next prime minister. That promise carries weight, given the former Palang Pracharath secretary general’s extensive political connections and deal-making skills.

For many political observers, Thammanat could serve as the perfect link between Prawit and fugitive former prime minister Thaksin Shinawatra, patriarch of the opposition Pheu Thai Party.

Thammanat began his political career in 1999 with the now-defunct Thai Rak Thai Party, which was founded and led by Thaksin, and later joined Thaksin’s proxy People Power and Pheu Thai parties.

Thammanat then joined the ruling Palang Pracharath, considered Pheu Thai’s arch-rival, but has apparently managed to retain strong ties with Thaksin and the Shinawatra family.

History won’t be made, unless …

Last October, rumours of a deal between Prawit and Thaksin spread like wildfire after Thammanat reportedly took a trip to Dubai, where the deposed ex-premier lives after fleeing a jail sentence in 2008. Observers speculated that the deal was for an alliance between Pheu Thai and Palang Pracharath to form a new coalition government after the general election later this year.

Thaksin denied he had made any such agreement.

“Certainly, there’s no deal. I am not involved and I have no duty to make a deal,” he said.

However, his denial has failed to silence growing speculation that Prawit will get the prime minister’s seat in the post-election coalition government in exchange for helping Thaksin to return without having to serve prison time in Thailand. The ex-PM has been sentenced to a total of 10 years in jail in separate cases stemming from abuses of power while in government.

Pheu Thai is widely expected to win the largest share of MP seats at the next election, but it is thought unlikely to gain the “landslide” victory it needs to form a government without help from others. To return to power, Pheu Thai may need support from Palang Pracharath and Prawit, who enjoy the backing of many senators.

The 250-member Senate will join the 500 MPs in the vote to elect the prime minister after the next election, which is tentatively scheduled for May.

A simple majority of 376 parliamentarians from both Houses is required to elect a new PM.

Thammanat’s return to Palang Pracharath came after Prime Minister Prayut Chan-o-cha, the party’s sole PM candidate at the last election in 2019, made it clear early this month that he would join another party, Ruam Thai Sang Chart, for the next national vote. Prayut’s departure has apparently further soured his already troubled ties with Prawit and the ruling party.

Prayut has been at odds with Thammanat since the censure debate targeting him and some of his ministers in August 2021. Back then, Thammanat was thought to have plotted to unseat the prime minister by lobbying coalition MPs not to support him in the no-confidence vote. Prayut managed to secure a majority in the vote, albeit a smaller one than most other targeted ministers.

Just days after the debate, the PM sacked Thammanat from his post of deputy agriculture minister. However, Thammanat, who is seen as Prawit’s man, managed to keep his powerful party seat as secretary-general.

The bitter conflict between Prayut and Thammanat also triggered a virtual “civil war” in the ruling party between Thammanat’s faction and rivals who back Prayut. The infighting eventually led to the expulsion of Thammanat and 20 other MPs in his faction from the party.

The decision was taken by a new executive board dominated by Thammanat’s rival factions, who said the expelled MPs had caused disunity that undermined the party. The ousted MPs later joined the Thai Economic Party, with Thammanat serving as party leader.