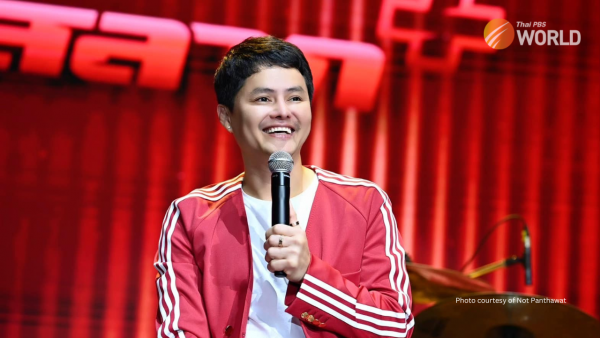 The CEO of online lottery platform Kong Salak Plus, Panthawat “Not” Nakwisut, appears to have his own style of working. At a time when most people would have shifted into defensive mode, Panthawat has launched an all-out offensive.

“I am going to enter politics,” Panthawat declared the other day. “I have already founded a political party. It is called CHANGE.”

Panthawat responded by pleading innocence, before promptly launching into politics. His mission, he said, was to take care of all 200,000 lottery vendors in the country while tackling their problems at the grassroots level.

“Since childhood, I have witnessed the woes of people at the grassroots level. I will address all their everyday problems one by one until the overall picture improves,” he said.

He announced his political debut just after being summoned to acknowledge several charges and answer why his firm had received huge sums from a money-laundering suspect earlier this month.

Panthawat claims to be no stranger to hardship, saying he grew up poor in a ramshackle house without even a bathroom.

He said his parents put him through school, while he tried to help them by earning extra cash. By the age of 10, he was helping his mother sell groceries to factory workers, and at 12, he began looking for jobs as a manual laborer, but by 17 he was using and selling methamphetamine tablets, according to his life story.

Panthawat eventually dropped out of school and escaped to Bangkok. Realizing that his methamphetamine habit was destroying him, he began looking for a proper job. However, he reportedly spent most of his early adult years working in the nightlife district.

At 25, he returned home, got ordained and later married his sweetheart. He then started a new life by taking a job as a messenger.

His quick wits saw him climb the ladder until he finally left the firm as technical manager. But he quit because the job had become boring and, by the time he was 30, he had set up his own gaming parlor.

He said the gaming parlor required little attention, leaving him plenty of free time to study information on the internet and explore new opportunities in cyberspace.

He was interested in ways of making big money online, including by promoting shops with search engine optimization (SEO) techniques, selling products himself, and holding seminars on using digital skills to get rich.

Panthawat said that his monthly income soared to 2 million baht. However, he got carried away by his success, squandered his riches and eventually had nothing left to support his family.

Realizing his mistakes, he returned to square one and created a Facebook page for football fans. His was the first Facebook page in Thailand to feature football match highlights with dubbed Thai commentary.

He said that after his page began doing well and attracting a large audience, a shady powerful figure approached him with the offer of a business partnership.

Panthawat said he took the bait and ended up losing the page to the “influential” business partner, who had the backing of a high-ranking police officer.

The dispute over the Facebook page was so big that Panthawat had to flee to Chiang Mai and lie low for a long while. However, he said he was able to return with his head held high because he had made a new powerful friend.

His new associate was quite young but reportedly operated gambling websites under police protection. Panthawat’s ability to capture top billing on the internet with his SEO expertise was the first thing that caught this benefactor’s attention.

With his new patron’s support, Panthawat was able to return to the cyberworld and set up Kong Salak Plus. Last year, his platform earned more than 1.19 billion baht in revenue.

Now, Panthawat insists he is innocent of the many charges leveled against him. And he claims his venture into politics is motivated by a desire to reform Thailand’s government lottery for everyone’s benefit.

“I am going to contest the upcoming general election as a party-list MP candidate,” he said. Panthawat, who was last seen at Suvarnabhumi Airport on January 20, said he will return by the end of the month.