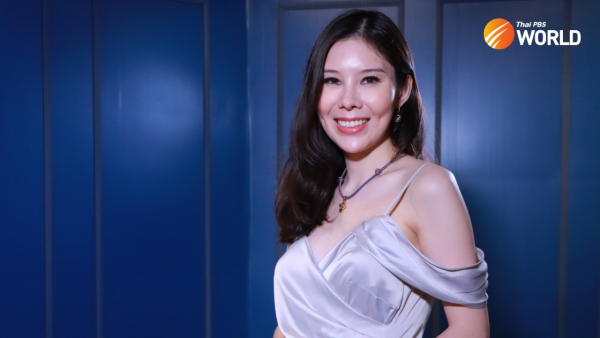 “I have been suffering from gender-based violence since I was young, because I was born a girl in a male body, which is not recognised in the gender-binary system. In retrospect, my childhood was exceedingly bitter and I can remember all the violent memories, just like it happened yesterday.”

This is Chitchapa Panich’s description of her life, as she started to recall painful memories from her past, when she was dehumanised by both her family and at school, because of her gender identity.

“When my family knew that I was a trans-woman, all of them devalued me with horribly insulting words, such as saying I was mentally ill and that I would never succeed in life. When I got into school, I was bullied by my friends, both verbally and physically. My gender identity became something of which they could make fun.”

“Girl in a male body”

Since Chitchapa realised that deep down, she was a “girl in a male body”, she became a victim of discrimination and bullying.

Born in Thailand’s north-eastern province of Roi-et and raised in a nearby province of Maha Sarakham after her parents’ divorce, Chitchapa said she was ostracised by her father and her relatives, who believe that being born a boy means you should behave like a boy, and being a katoey is a huge embarrassment for them. Katoey, in the Thai language, refers to both effeminate men and trans-women.

Sadly, it wasn’t only her family who ostracised her for her gender identity. Many of her teachers and peers also physically and verbally abused her.

Among the most traumatic experiences, which still haunts Chitchapa, was when her teachers stripped her dignity by cutting her hair in the school hall in front of her classmates, who did nothing but laugh at her. On top of the abuse, she was forced into school activities that were meant for boys and to sleep with other boys during school camp.

Being dehumanised for her gender identity was already traumatic, but trying to defeat the injustice around her was also a tough battle. As Chitchapa explains, she had no “self-asylum” to protect herself from gender-based violence or even a safe place to cry whenever she was bullied.

“I’m a woman inside, but society throws all the rules, the roles and the expectations of a man at me. I’m not asking for privilege over others. I just want to be a woman, but the teachers, the adults and people who have the authority to make decisions do not understand me and abuse me all the time.”

Despite the mistreatment by society, there’s one person who truly accepted Chitchapa for who she really is and fully supported her dream of becoming a lawyer – her mother.

“My mother never rejected or denied my identity,” she said. “She knows what I really am inside and she even encouraged me to be a woman.”

Not only that, Chitchapa’s mother even wished for her to become a judge, which she believes will eventually inspire other people to realise that everyone has the ability to achieve whatever they dream of, regardless of their gender or social status.

“When she knew that I wanted to become a lawyer, she supported me a lot in my education. She believes that I can change the world one day, especially Thai society, to accept the LGBT community and for women’s social status to be equal to men and to everyone.”

Chitchapa, who calls herself a trans-woman feminist lawyer, has been advocating for human rights for the LGBT community, shedding more light on the struggles those people are going through. She has also been invited to speak at academic fora and became an advisor to parliament in drafting the gender recognition bill.

Even so, her own battle against discrimination and unfair treatment continues.

The 26-year-old transgender lawyer says she is still oppressed by rules and regulations, as she was forced to wear a uniform according to her birth sex.

Chitchapa previously filed a complaint with the Committee on Eliminating Gender Discrimination, after she was threatened by the Lawyers Council of Thailand with score deductions if she dressed as a woman during legal exams.

“They forced me to wear the male uniform, which is in contrast with my female identity. This causes a big obstacle for me in getting access to a legal education and to my profession.”

After an almost year-long battle, the Lawyers Council of Thailand has agreed to revise its existing rules to allow lawyers to wear a uniform appropriate to their chosen gender. The council has also agreed to allow female lawyers to wear trousers in court.

After she submitted the complaint, the Medical Council of Thailand announced a new set of regulations in November, removing the terms in question and providing more details of how sex-reassignment patients should be defined. The revised changes are what Chitchapa thinks is an impressive accomplishment for her as a transgender lawyer.

Even though the awareness of gender diversity in Thai society has increased, stereotypical views and societal oppression against katoeys, including transgenders, persist.

People with conservative minds still believe that katoeys could only be either makeup artists, showgirls or sex workers. Therefore, people barely imagine a transgender pursuing what Thai culture defines as “reputable” careers, such as doctors, teachers or lawyers.

Gender diversity is also never discussed in school textbooks, hence the lack of understanding of the LGBT community. Thai soap operas also continue to portray people of ‘third genders’ in a negative light, re-emphasising the stereotypes against them.

“As our society is dominated by the gender-binary system, which is a key part of the patriarchy, the LGBTQIAN+ community have been excluded and even stigmatised as having a mental illness.”

Chitchapa also reflects that transgenders are still deprived of fundamental rights, such as having the right to wear a uniform according to their chosen gender, receiving an education, having access to proper medical treatment, being legally recognised as a spouse and, most importantly, having their gender identities fully recognised by the law. Even worse, transgenders and non-binary genders are barely protected by the justice system, particularly when they fall victims to abuse or sexual harassment.

“The LGBT people don’t get any remedies, compared to the disabled, women or children. We still have the law to protect those people, but what about us? When people discriminate against us, when people stigmatise us, when people sexually harass us, which law is going to protect trans-women?”

Nowadays, Thailand seems to be placing more importance on human rights for the LGBT community, one of them being same-sex marriage. Though Chitchapa saw it being a good sign for the country, the thing that she does not want to see are political parties claiming their support for LGBT rights only to gain popularity from its voters.

“I think it’s a good sign, but what I don’t want to see is political parties trying to support it, just because they want the votes. I don’t want this to happen. I want political party members to seriously look into the lack of rights of the LGBT people.”

You’re not born to be a victim

Though there is still a long way to go for the LGBT community to be fully protected by Thai law, Chitchapa believes that the bigger issue is how to eliminate the negative attitude towards these people.

“When people have the wrong perception and a biased attitude towards LGBT people, it is likely to result in stigmatisation and stereotyping,” she said.

“What I hope to see is people de-normalise violence against trans-women and help eliminate the root cause of such problems; the gender bias and the myth regarding the LGBT community. Everyone is equal in dignity and supposed to be treated with respect, regardless of gender.”

As to what she would like to say to all (transgender) women, the bottom line is that every single woman is equal to men. Most importantly, nobody is born to be a victim of sexual harassment, stigmatisation, gender-based violence, unfair laws and regulations or discrimination.

“You deserve respect and value, regardless of how you look or what roles in society you are taking. Do not underestimate yourself just because you cannot serve the social standards, which are set by the patriarchy.”