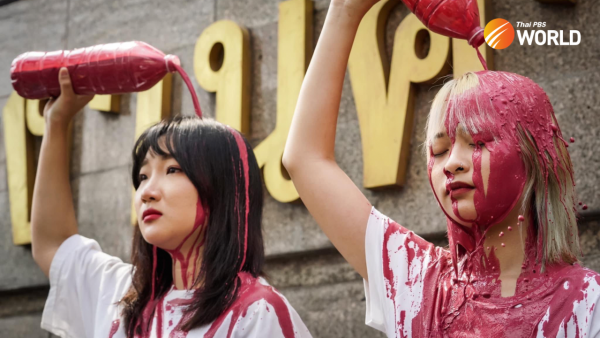 Political banners popped up on the campuses of Chulalongkorn and Thammasat universities on Friday, urging students to “wake up” politically and not to submit to suppression of free expression.

The banners are in support of two monarchy reformists, Tantawan Tuatulanon and Orawan Phuphong, who voluntarily revoked their own bail to return to a women’s remand home to start their hunger strikes.

The two protesters rallied in front of the Criminal Court on Monday to announce their decision to return to the Central Women’s Correctional Institution (CWCI) and to begin their hunger strikes in two days, if their demand for the release of all political detainees and prisoners is not met.

The two young women poured red paint on their bodies as they declared that they were willing to shed their blood.

The Criminal Court endorsed their request for bail revocation and ordered them to be sent back to the women’s remand home on Tuesday.

A few supporters camped in front of the CWCI on Thursday night to offer moral support to the two hunger strikers, who began their strike yesterday (Thursday).

The group refused to collect their tent and an umbrella, as ordered by the court, which claimed that they were obstructing a public right of way. They vowed to hold a vigil there every day, from 3pm until 6am.

Reporting on the two hunger strikers’ condition yesterday, Thai Lawyers for Human Rights said that both were thirsty, exhausted and experiencing dizziness and that a doctor at the CWCI assessed their condition to determine whether they should be sent to a prison hospital

Tantawan emerged as a monarchy reform advocate in February 2022, when the Thalu Wang monarchy reform group conducted a poll at Siam Paragon shopping mall on whether people are inconvenienced by Royal motorcades. She is now facing several lèse majesté charges.