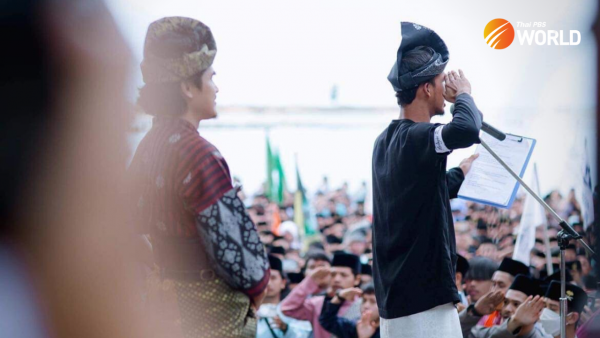 Expressing one’s identity and historical-cultural narrative, regardless if it is different from the state-constructed one, should not be a crime in this day and age.

But when you have a bunch of dinosaurs running the country — or million-year-old turtles, as Thai people like to say — one has to work a little harder and be a little more patient to show these officials that embracing one’s own identity is not a threat to Thailand’s nationhood.

First of all, it shouldn’t even be an issue. And yet, when thousands of young Melayu males came together on the beach in Sai Buri district in Pattani just days after the holy month of Ramadan last year, Thai officials — especially those in the security agencies — got bent out of shape. A year later, they continue to make threats to local activists, more so now, as the next Ramadan is two months away.

“Thai law enforcement has informed me regularly that they are in the process of compiling evidence and witnesses to charge the organizers of the Sai Buri event with public disturbances,” said Hasan Yamadibu, a leading member of Civil Society Assembly for Peace, or CAP. “They are trying to get us to rethink our campaign. These threats are nothing less than an effort to quell the freedom of expression of the Malays of Patani,” Hasan said.

This year’s Ramadan is expected to see the same thing: thousands of young Melayu men fully dressed in traditional outfits — bright, shiny, and proud — gathering to take an oath in front of one another that they will forever embrace this God-given identity.

For the Melayu in Southeast Asia, being a Malay and being Muslim are two sides of the same coin. To change one’s identity is almost like leaving one’s religion. Unfortunately, the Thai State never understood that, or else they would have to ditch their policy of assimilation long ago.

Malays who pretend to be something they are not are often equated to a sellout — a person who betrayed their own values and integrity. At a time of rapid social changes where old ways of doing and seeing things are quickly making way for new trends, fashion, way of life, and political outlooks, people here in Thailand’s southernmost border provinces, or anywhere else, for that matter, are nervous.

Social changes and cultural activities are observed through the security lenses of government officials. Incidents in the Patani region have different connotations because of the ongoing conflict and insurgency that so far claimed more than 7,300 lives since January 2004 when a new generation of Patani Malay combatants resurfaced after a decade of relative calm.

Like the previous generation of fighters, the combatants of the current wave of insurgency embrace the same long-standing grievances that basically centered on the suppression of their narrative through a policy of assimilation at the height of Thai nationalism.

In the past, Thai/Siamese rulers understood that their relationship with the Malays was something that had to be managed with sensitivity and sensibility. Today, it seems that we have gone backward with Thai officials’ all-or-nothing attitude toward the Malays of Patani. Managing such relationships requires some degree of sophistication – the kind that Thai civil servant and policymakers don’t seem to have.

Efforts to break free from Siam’s hold were not new. But many here felt the Thais had crossed the line as they tried hard to push their policy of assimilation down the Patani Malays’ throats. One day, the mother tongue was used in public schools and places. The next day, it came to an abrupt end. One had to speak Thai. Not just any dialect but the dialect uses by the policymakers in Bangkok. Funny, how they don’t see the arrogance behind their actions.

“Instead of suppressing our freedom of expression, freedom to embrace our own identity, Thai officials should know that rights and freedom of the people are of utmost importance if one is serious about achieving a solution to any political crisis,” said Muhammad Aladi Dengni, president of CAP.

Efforts by law enforcement and other government officials to curb Patani Malay’s effort to express and reaffirm their own identity send a very wrong signal and a dangerous one at that. Not only it sours the overall atmosphere between the state and the Malay minority, it has created a negative impact on the ongoing peace process between the government and the Barisan Revolusi Nasional (BRN), the one group that controls virtually all of the combatants on the ground.

For some months now, the topic of public consultation (PC) has been on the negotiating table between Thailand and BRN. PC is a process in which inputs from the constituency in the conflict-affected region are given to both sides. Cracking down on Melayu activists for displaying their cultural identity creates a climate of fear. Under this climate, it is very likely that people will hold back instead of speaking their minds. Or the government is happy with a half-hearted PC?

The government has consistently employed strategic lawsuits against public participation, also known as SLAPP, in its effort to silence critics. But what we experiencing in Patani is much more than a civil complaint or counterclaim. It is nothing less than a gross violation of the freedom of expression. Past history has shown that it could end badly for critics.

About sixty years ago, the late spiritual leader, Haji Sulong Toemeena, went around and openly criticized the government’s handling of the far South. He was not calling for a separate country, but equality and justice for his people.

Haji Sulong compared the conditions of the public schools in the far South to a chicken coop. That really upset the Thai officials who equated his criticisms as treason. Many believe that this paved the way for his abduction and disappearance.

Could the same old heavy-handed tactics and attitude towards people who embrace a different set of cultural and historical narratives from that of the state be making a return to the Patani region?

Looking back, many Thais would admit that the government’s handling of Haji Sulong was a big mistake. His disappearance continues to haunt the Thailand-Patani region as it became part of the narrative and reference point for the separatist movements who remind the Melayu of Patani that the Thai State has never been just or fair to the people of Thailand’s Malay-speaking South.

Asmadee Bueheng is the communication strategist for The Patani, a political action group that advocates right to self determination for the Malays of Patani.