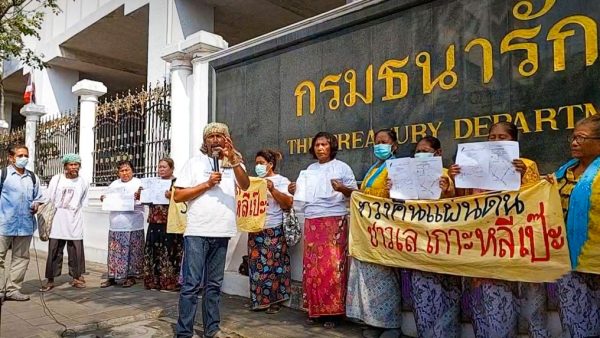 A group of Moken sea nomads, from Lipe Island in Thailand’s southernmost province of Satun, rallied in front of the Treasury Department on Tuesday, to demand justice over alleged land encroachment and intimidation.

The group also submitted a petition to an official at the United Nations office in Bangkok this morning (Tuesday), seeking an investigation into alleged human rights violations on the scenic island, where they have lived for generations and which is now being threatened by an influential figure who is trying to take over their land.

Wittawat Thepsong, a coordinator for the Moken of Andaman Network, said that a land occupation right, issued to the influential figure, encroaches on the land of a school on Adang Island and has resulted in the blocking of access to the beaches and the sea.

He said that the Moken indigenous people used to have free access to the beaches and sea, but now they are being denied such access.

Lipe and Adang are islands within the Tarutao National Park and they are about 15 minutes away from each other by boat. Both are popular tourist destinations, famous for their pristine environment, white sandy beaches, crystal clear waters and beach corals.