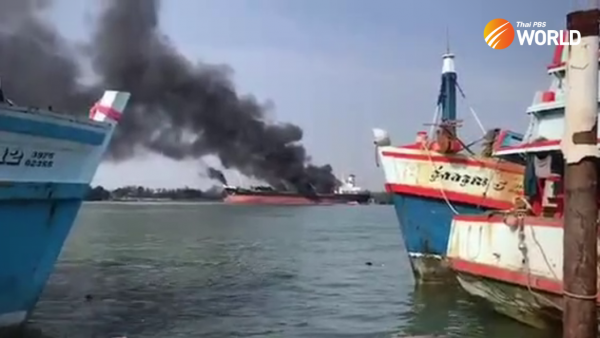 At least four people were injured and a number of houses sustained damage when an empty oil tanker caught fire, followed by an explosion, while it was undergoing maintenance at a dockyard on the Mae Klong River in Mueang district of Samut Songkhram Tuesday morning.

According to the Thai Maritime Enforcement Command Centre, there was an explosion on board the Smooth Sea 22 tanker at about 9.17am, in the dockyard of Ruam Mitr Dockyard Company in Laem Yai sub-district.

The explosion shattered windows in a few houses near the dockyard and about four people sustained minor injuries. Some workers in the dockyard jumped into the river to escape the effects of the blast.

Fire-fighting boats rushed to the scene to fight the fire, which was still burning at the time of this report. The cause of the fire is not yet known.

The oil tanker moored at the dockyard on January 12th, after it had unloaded all its oil.