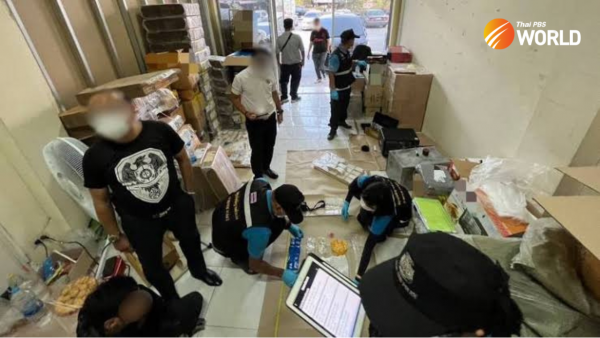 Thai anti-narcotic officials have seized 200,000 methamphetamine tablets, hidden in two electric ovens which were found in parcels at a delivery service company in Nonthaburi on Friday, and have arrested the sender.

The two parcels, one containing 148,000 meth tablets and the other containing 52,000, were to be sent to a recipient named “Varisra” in Muang district of the southern province of Nakhon Si Thammarat.

Wichai Chaimongkhon, secretary-general of the Office of the Narcotics Control Board, said today (Sunday) that the arrest of the sender, 23-year-old “Kasem”, a resident of Pathum Thani, followed the arrest of another man, “Nopparut”, in Thung Yai district of Nakhon Si Thammarat, and the seizure of a parcel containing 12,131 methamphetamine tablets on January 7th.

That parcel was also addressed to “Varisra”, but in Muang district of Krabi Province.

During questioning, Nopparut implicated Kasem as the man who ordered him to pick up the narcotics, to have them packaged and sent by parcel delivery to customers in southern provinces.

He admitted that he had picked up 200,000 meth tablets at a utility pole in Bang Bua Thong sub-district of Nonthaburi Province. He stuffed the drugs into two electric ovens to be sent to Nakhon Si Thammarat using a delivery service in Nonthaburi.

He said he was paid between 10,000 and 25,000 baht for each parcel sent, adding that the money would be transferred into his bank account.

Wichai said that the use of private parcel delivery services to send illegal narcotics to their customers is on the rise, because of their low cost and convenience.

He warned such delivery services that, if they do not check their parcels properly or collude with the traffickers, they will face a fine of between 10,000 and 100,000 baht for each offense.