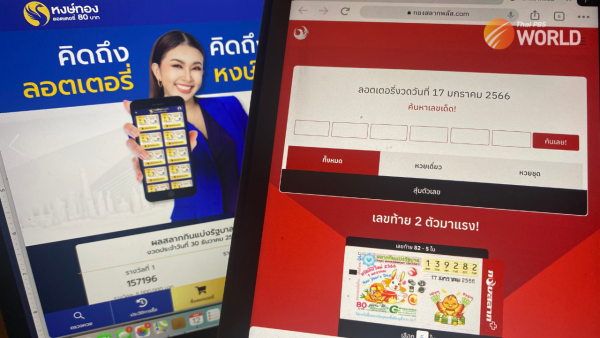 While Thai digital lottery platforms continue to operate as normal, two giants of the business are now licking their wounds while others face increased scrutiny by authorities.

The damage was inflicted when one digital lottery operator began making apparently false claims about its “lucky tickets”, sparking a battle that has resulted in the whole online lottery sector coming under an unwanted spotlight.

How it all began

Nawat Itsaragrisil, whose firm organizes the annual Miss Grand Thailand contest, was the first to raise questions about Hong Thong’s claims to have sold tickets that won fortunes.

Hong Tong was a major sponsor of Miss Grand Thailand 2022, and under the sponsorship deal, the winner and the runners-up were required to present awards to winners of the first prize in the government lottery. The first time that Hong Thong summoned the beauty queens to hand over the awards, they duly turned up with big smiles.

However, Nawat became skeptical after Hong Thong made repeated claims of having sold the first-prize ticket, and finally decided to go public with his suspicions.

Thitapa Thanasappreecha, Hong Thong’s chief executive officer, initially reacted angrily and even went as far as filing a defamation complaint against Nawat. But when Nawat produced a witness to back his belief that Hong Thong was making fraudulent claims to boost its business, Thitapa quickly retracted her accusation and issued a tearful apology.

However, her apology exposed well-known actor Krittarit “Big M” Butprom and landed him in hot water. Krittarit had previously boasted on social media that he had won the lottery jackpot with a ticket from Hong Thong. When the scandal broke, Channel 7 dropped Krittarit like a hot potato, cancelling his contract.

Kong Salak Plus then joined the fray by declaring that Hong Thong and its accomplices could face punishment for making false claims about lottery winners, under the law against uploading false information to the internet. It also raised questions about whether Hong Thong was illegally evading tax payments.

Hong Thong hit back at Kong Salak Plus, accusing its rival of operating as a money-laundering outfit.

However, neither side has come out of this battle unscathed and both are now facing serious business setbacks.

Police have pressed several charges against Kong Salak Plus, including lottery ticket overpricing and operating a direct-marketing business without a license.

The Department of Special Investigation is also looking into whether there is any truth in the allegation made by Hong Thong that Kong Salak Plus operates as a money-laundering outfit for criminals.

However, Hong Thong is not off the hook either. It runs the risk of being punished for making false claims, especially if someone files a complaint with authorities alleging they have been damaged by these claims.