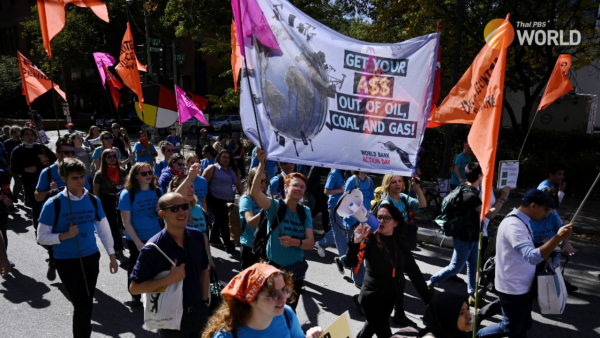 Climate activists protest outside the World Bank headquarters against fossil fuel projects during the IMF and World Bank annual meetings in Washington, DC on October 14, 2022.
(Photo by Olivier Douliery / AFP)

Could fossil fuel companies be forced to remove planet-heating carbon pollution from the atmosphere? Researchers argue in a new paper that would be a cheaper, fairer solution to the climate crisis.

They suggest, in the research published Thursday, that the principle of extended producer responsibility (EPR), a policy tool often used to deal with waste, should be extended to the oil, gas and coal industries.

The study said impelling fossil fuel firms to use technologies to suck carbon from the air and bury it back in the ground would be a cost-effective decarbonisation strategy.

“It would also mean that the principal beneficiary of high fossil fuel prices, the fossil fuel industry itself, plays its part in addressing the climate challenge,” said the paper published in the journal Environmental Research Letters.

The invasion of Ukraine by key oil and gas producer Russia has sent shockwaves through energy markets, resulting in prices surging and shining a spotlight on bumper fossil fuel industry profits.

The study’s authors, including scientists and experts in Britain and the Netherlands as well as a former ExxonMobil manager, said the paper was a response to the energy crisis and potential lessons for the challenge of getting to net zero emissions.

“We need to start a conversation on how we redirect this colossal amount of money that currently is simply injected into fossil fuel rents to addressing the climate problem,” co-author Myles Allen, a professor at Oxford University, told journalists.

“We are going to have to stop fossil fuels from causing global warming before the world stops using fossil fuels.”

To do that, he said, requires “geological net zero”, for every tonne of CO2 emitted by a fossil fuel, one tonne of the greenhouse gas would need to be sucked out of the atmosphere and permanently put back in the ground.

The authors propose that all extractors and importers of oil, gas and coal be required to dispose of an increasing proportion of the CO2 generated by their activities and products — up to 100 percent by 2050.

This would require increasing use of technologies to extract carbon dioxide at the emission source or directly from the air and store it permanently in the ground.

While there are projects doing just this already, these are not at anything like the scale needed. The largest direct air capture facility in the world, run by Swiss-based Climeworks, removes in a year what humanity emits in a few seconds.

But the economics would change if the fossil fuel sector were forced to rely on technology, the authors argue.

Hugh Helferty, co-author of the study and a former employee of oil giant ExxonMobil, said the industry is “capable” of removing CO2.

“What it lacks today is the business case, the motivation for executing it,” he told reporters at a press briefing, calling for regulation, like the rules banning lead in petrol.

Hannah Chalmers, Reader in Sustainable Energy Systems at the University of Edinburgh who was not involved in the research, said that EPR would be a “game-changer” in delivering affordable low-carbon energy.

US oil and gas major Occidental last year announced plans to build by 2024 what the company says will be a bigger direct air capture project in the US Permian basin in oil field in Texas, with a one-million-tonne annual carbon dioxide removal capacity.

The Paris Agreement calls for capping global warming below two degrees Celsius, and most countries have signed on for a more ambitious limit of 1.5C.

To meet that challenge, UN climate experts said in a landmark report last year that even under the most aggressive carbon-cutting scenarios, several billion tonnes of CO2 will need to be extracted each year from the atmosphere by 2050.