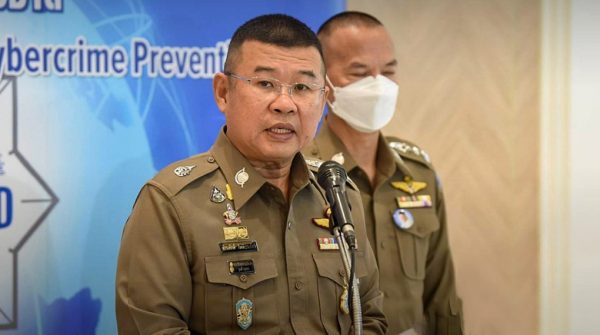 Six metropolitan police officers, including a deputy commander, have been relieved of duty for allegedly aiding and abetting the criminal activities of a Chinese criminal gang, allegedly led by Chinese businessman Chaiyanat Kornchayanant, aka “Tuhao”.

Pol Gen Damrongsak Kittipraphat, the national police chief, said today (Thursday) that the six officers, including Kornchayanant’s Thai wife, who held the rank of a police colonel, a deputy commander of Metropolitan Police Bureau, are under investigation for gross disciplinary violations and their case has been sent to the National Anti-Corruption Commission.

He said, however, that the six officers implicated have the right to defend their case in court.

37 other men are also suspected of being involved in the criminal gang, of which 19 are being held in remand in prisons, including Kornchayanant. More than 400 witnesses have been questioned by the police to date.

Pol Gen Damrongsak said police have also been fact finding in response to an allegation by Chuwit Kamolvisit, a former massage parlour tycoon, claiming that a nephew of Prime Minister Prayut Chan-o-cha might be involved in Kornchayanant’s tour bus business.

He said that the business connection dates back to 2000 and is not related to the current case against Kornchayanant and his men.

He assured that the case against Kornchayanant and others implicated in the illegal activities will not be a collapse, as feared by some critics.