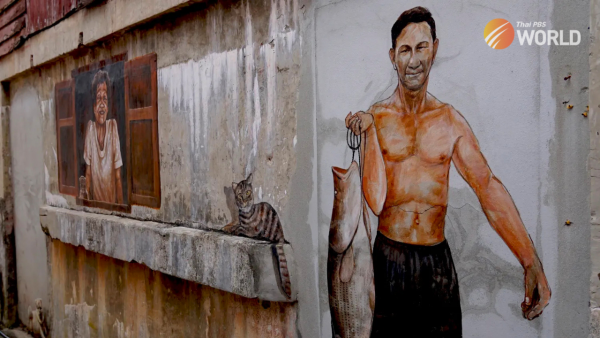 The canal-side village in Chanthaburi province is drawing visitors and those with a sweet tooth for its desserts with strange names including “Monkey Willy” (a mung bean rice crepe in a phallic shape). It’s a funny but tasty sweet that will have you searching for more idiosyncrasies of old-school cooks.

Located 10 kilometres south of Chanthaburi, the village of Ban Nong Bua has been home to Hainanese descendants for over 200 years. Their forefathers, seafarers, sailed from Hainan Island in Southern China to the horizon and eventually settled down along the mouth of the Chanthaburi River.

Like many Chinese who left the mainland in search of new pastures, the Hainanese built wooden shophouses, Chinese shrines, and vegetarian eateries (as well as a slaughterhouse) and a small noodle plant at Ban Nong Bua. This small riverside community has since grown into the large and bustling marketplace of today where goldsmiths and artisans working with gems and jewellery ply their trade.

Ban Nong Bua has recently transformed itself into a weekend travel hotspot. Visitors and weekenders enjoy exploring the historical district and searching for a wide variety of street food with unusual names.

Begin by crossing the small bridge from the parking lot to the T-junction’s alleys, where you will find a variety of street food options guaranteed to whet your appetite. You’ll be captivated by the bustling street vibe and aromas, while food with ridiculous names like “Cow Piss,” “Snout Beetle Shit,” and “Bald Head” will add a taste of mystery to your gustatory adventures.

When it came to naming desserts, old-schoolers differed from today’s celebrity chefs in their belief that you could name a dessert anything, even if it sounded provocative or unappealing.

“This type of dessert has been around Ban Nong Bua neighbourhood for a century,” says Raweewan Klueabkaew – or “Auntie Tum” – as she prepares to drop a piece of dough the size of a small cigar into a pot of boiling water. “At first, the dessert didn’t have a name. One day, the children in the house asked what the name of the dessert was. One dessert maker couldn’t think of anything and told the children that it’s a monkey willy. That was because it looked like a monkey’s penis.”

Toponymists would probably scratch their heads over Auntie Tum’s little statement. But it makes sense to the folks in Ban Nong Bua who share the riverside community and lush mangrove forest with lots of macaques.

Indeed, Monkey Willy is a Mung Bean Rice Crepe (Kanom Tua Pab) in a long and circular shape – instead of typical pea pod or taco-like shape. The dough is made of glutinous rice flour. Once they’re cooked in boiling water, the dessert maker lays them on the mung bean mixture before serving them with grated coconut and granulated sugar. It will fill your mouth with a nutty, crunchy, and sweet mishmash.

The old riverside community of Ban Nong Bua is also a joy to explore on foot. Step back in time in small alleys graced by old charming shophouses with wooden shutters, floral façades and snoozing cats.

In the past, there was a busy fish market on the old pier that’s now a local shopping place for seafood and seasonal produce.

Of course, Ban Nong Bua has more to share with hungry visitors than desserts with odd names.

For lunch on the run, seafood-based street food and the traditional Thai snack of La Tiang are favourites. For a sit-down meal, try Mu Liang noodles with Chanthauri’s signature broth with made local herbs and spices.

Shellfish connoisseurs will love tucking into a crispy mussel omelette and smoked clams that comes with a sensational seafood dip and washed down with the dubiously named but delicious drink of “Cow Piss” or sugar cane juice.

The food market at Ban Nong Bua is about 10 kilometres south of downtown Chanthaburi. It’s open from 9am to 5pm on Saturday and Sunday.