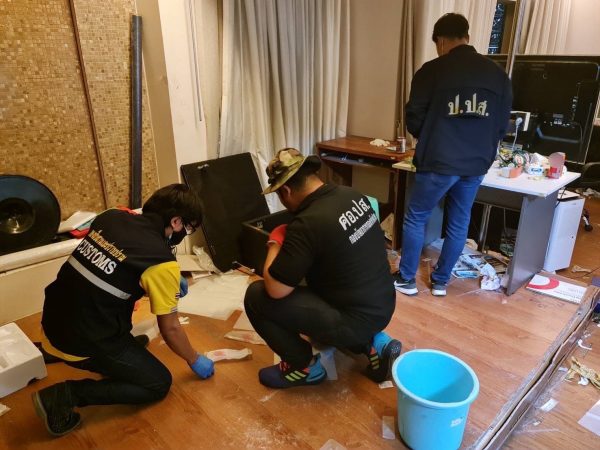 Thai anti-narcotics officials seized about 44 kilogrammes of heroin and 21 grams of crystal methamphetamine (Ice) in raids on two houses in Samut Prakan yesterday (Monday). A Hong Kong man and a Thai national were taken into custody.

Narcotic Control Board (ONCB) officers raided a rented house in Soi Kanchanapisek 39, where they found about 30kg of heroin hidden in a cardboard box and about to be sent abroad.

The man from Hong Kong and a Thai from Chiang Rai Province, were in the rented house at the time of the raid. Both men were then taken into custody for further questioning.

Anti-narcotics officers said that the man from Hong Kong did not have a passport, but they found a Thai ID card in his name, adding that they will check whether the card is genuine.

The officials then raided another rented house, located about 15km away, which uncovered another 14kg of heroin and 21g of Ice.

On the same day, customs officials at Bangkok’s main port found 50kg of Ice hidden among carpets being shipped abroad. The drugs were traced to one of the two houses in Samut Prakan which were raided.