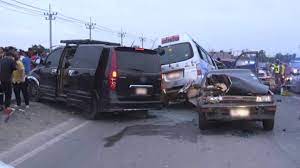 Two students were killed, with 16 other students and the driver injured, when their school bus crashed into a passenger van, which was travelling in the opposite direction, in Mueang district of Phichit province yesterday (Monday) evening.

Survivors said that, before the accident, a sedan tried to pass the school bus on the inside, forcing the van driver to steer his vehicle into the oncoming lane, just as black van was approaching from the opposite direction, resulting in a collision involving all the three vehicles.

Emergency services had to use hand tools to free an 8-year-old boy, who was stuck in the wreckage of the school bus.

All the injured were rushed to the district hospital and two students were pronounced dead upon arrival.

The four-lane road is undergoing repairs, so two lanes were closed to traffic.