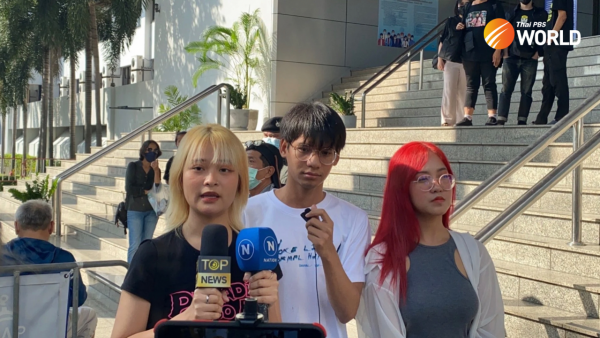 The Criminal Court revoked the bail for two monarchy reform activists today (Monday), after they had breached their bail conditions by getting involved in public protests.

The court also issued warrants for the detention of the two activists, Nutthanit Duangmusit, aka “Bai Por”, and Sopon Surariddhidhamrong, aka “Get”.

Nutthanit, of the Thalu Wang monarchy reform activist group,had been indicted with a fellow member, Netiporn Sanesangkhom, on lèse majesté charges. They were held on remand at the Central Women’s Correctional Institute, but went on hunger strike for 64 days in June last year, to protest against their pre-trial detention. Both Netiporn and Nutthanit were granted conditional release in August.

On November 17th, however, Nutthanit is alleged to have joined a protest, with other anti-establishment activists, in front of the Royal Thai Police head office, which is a violation of their bail conditions.

Sopon, an activist from the Moke Luang Rim Nam group, who was also on bail on lèse majesté charges, joined the protest on November 17th, in violation of the bail conditions.

The Criminal Court found both activists had breached theirbail conditions, withdrew their bail and ordered them to be held on remand pending trial.