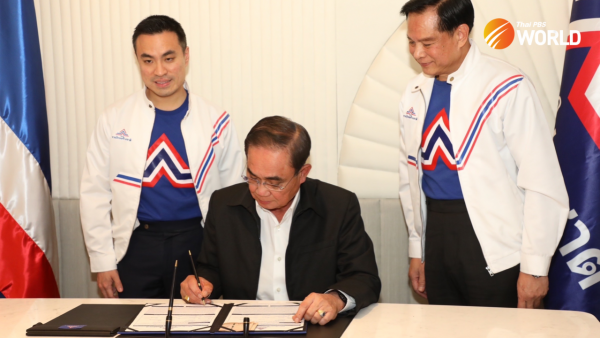 Prayut arrived at the convention centre in his private car, without his usual security team, at about 5.24pm. He was received by Pirapan and key party members and led to the reception hall, where he applied for party membership and paid the 2,000 baht life membership fee. He was then helped by Pirapan to put on a party jacket.

When he arrived, Prayut appeared calm, but did not talk to the army of reporters, as his supporters repeatedly shouted “Lung Tu Soo-soo” (Uncle Tu, Fight On).

During his address to party members, the prime minister said that, although he had become a party member, he could not completely erase his image as a soldier, because he was in military service for most of his life, adding that he will try to adjust nonetheless.

He admitted to being very excited today, joking that he was “afraid” of the affection shown toward him.

Pirapan had said earlier that the matter of Prayuth being nominated as the party’s candidate for the next premiership would not be raised at the event today.

Former Bangkok Governor Aswin said he will also apply to become a member of the party today, to help his former boss.

Foreign Minister Don said he had come to offer moral support, adding that he is not interested in joining the party yet.

He said he will quit the Palang Pracharath Party at the right time, to join the United Thai Nation Party.