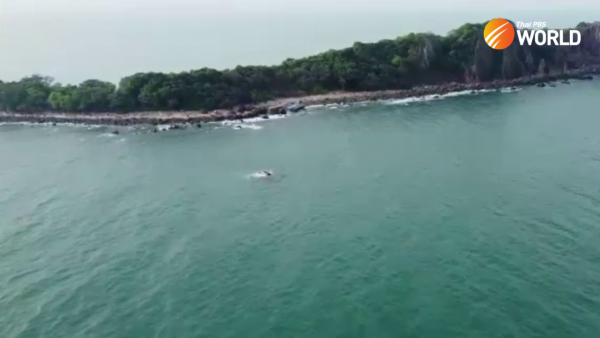 The Royal Thai Navy (RTN) has sought cooperation from fishing associations and private rescue groups in the search for the last five crew, missing from the ill-fated HTMS Sukhothai, as the search enters its 22nd day today (Monday), RTN Spokesman Admiral Pokkrong Monthatphalin told the media.

He said that RTN search teams, including foot patrols, are now concentrating on the beaches and rock formations on and around several islands in the Gulf of Thailand.

The search last night was on Samet Island, off Chumphon Province, where many para rubber planks were found after a cargo ship containing the lumber sank about two miles off Chaiya district of Surat Thani, as it was on its way to Laem Chabang deep-sea port in Chon Buri on December 18th, the same day that the Sukhothai foundered.

Admiral Pokkrong said the search yesterday failed to find any of the missing crew adding, however, that the search will continue and the RTN will keep the public informed of progress.

There was a complement of 105 crew on board HTMS Sukhothai, minus the chief engineer. 76 crew members were rescued. 24 were found dead, with one yet to be identified, and five are still unaccounted for.