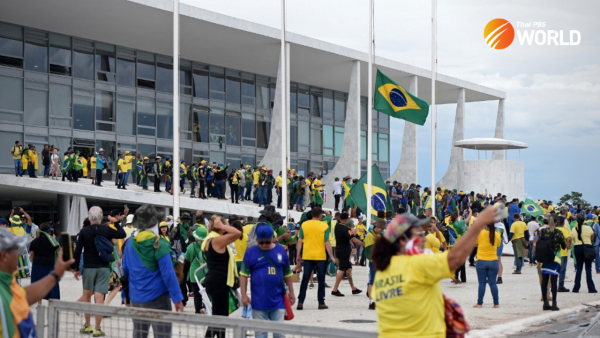 After hours of all-out chaos at the seat of power in Brasilia — reminiscent of the January 6, 2021 invasion of the US Capitol building by supporters of then-president Donald Trump, a Bolsonaro ally — security forces managed to reclaim the Congress building in the evening, AFP reporters said.

A massive operation was still under way to evacuate the demonstrators from the Planalto presidential palace and the Supreme Court, with security forces using riot police on horseback, water cannon and tear-gas bombs fired from helicopters to fight them back.

Lula, who was in the southeastern city of Araraquara visiting a region hit by severe floods, signed a decree declaring a federal intervention in Brasilia, giving his government special powers to restore law and order in the capital.

“These fascist fanatics have done something never before seen in this country’s history,” said the veteran leftist, 77, who took office a week ago after beating Bolsonaro in Brazil’s bitterly divisive October elections.

“We will find out who these vandals are, and they will be brought down with the full force of the law.”

The Senate security service said it had arrested 30 people in the chamber.

The chaos came after a sea of protesters dressed in the green and yellow of the flag flooded into Brasilia’s Three Powers Square, invading the floor of Congress, trashing the Supreme Court building and climbing the ramp to the Planalto.

The attorney general’s office said it had asked the Supreme Court to issue arrest warrants for Torres “and all other public officials responsible for acts and omissions” leading to the unrest.

It also asked the high court to authorize the use of “all public security forces” to take back federal buildings and disperse anti-government protests nationwide.

Hardline Bolsonaro supporters have been protesting outside army bases calling for a military intervention to stop Lula from taking power since he narrowly defeated Bolsonaro in the October 30 runoff election.

Crowds of protesters scaled to the roof of the iconic Congress building Sunday to unfurl a banner with an appeal to the military: “INTERVENTION.”

Social media footage showed rioters breaking doors and windows to enter the Congress building, then streaming inside en masse, trashing lawmakers’ offices and using the sloped speaker’s dais on the floor of the legislature as a slide as they shouted insults directed at the absent lawmakers.

One video showed a crowd outside pulling a policeman from his horse and beating him to the ground.

Police, who had established a security cordon around the square, fired tear gas in a bid to disperse the rioters — initially to no avail.

A journalists’ union said at least five reporters were attacked, including an AFP photographer who was beaten by protesters and had his equipment stolen.

Protester Sarah Lima told AFP they were demanding a review of the “fraudulent election.”

Lula narrowly won the runoff by a score of 50.9 percent to 49.1 percent. Bolsonaro, who left for the US state of Florida on the second-to-last day of his term, has alleged he is the victim of a conspiracy against him by Brazil’s courts and electoral authorities.

“I’m here for history, for my daughters,” said Lima, a 27-year-old production engineer wearing the yellow jersey of the Brazilian national football team — a symbol Bolsonaro backers have claimed as their own — and protesting with her young twin daughters.

Fellow protester Rogerio Souza Marcos said the elections had been plagued by “multiple signs of fraud and corruption.”

Newly-installed Justice and Public Security Minister Flavio Dino called the invasion “an absurd attempt to impose (the protesters’) will by force.”

There was swift international condemnation of the protesters.

Chilean President Gabriel Boric called the riots a “cowardly and vile attack on democracy,” Colombia’s Gustavo Petro tweeted that “fascism has decided to strike a blow,” and Ecuador’s Guillermo Lasso condemned the “disrespect and vandalism against Brazil’s democratic institutions.”

Bolsonaro rejected what he called new President Luiz Inacio Lula da Silva’s “baseless” accusations that he  incited the invasion of the seat of power in Brasilia. Writing on Twitter, the ex-president — who left Brazil for the US state of Florida last month on the second-to-last day of his term — also defended the right to “peaceful protests.”