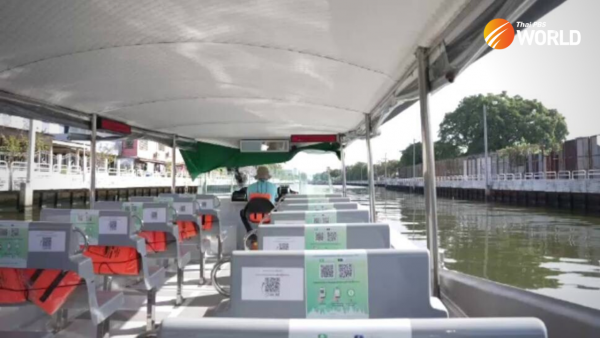 The Bangkok Metropolitan Administration (BMA) will reconsider the Khlong Saen Saeb electric boat service, due to its high operational costs and lack of passengers.

The service was launched about a year ago by the city’s administration as an option for bus commuters, to avoid traffic gridlock during rush hours. Although the trial service is free of charge, the number of passengers each day averages only about 400 for the 11-km journey, between Wat Sriboonruang pier and the Min Buri district office pier.

A small team of Thai PBS reporters recently took a ride on one of the electric boats and found that the trip between Wat Sriboonruang and Min Buri district office took about an hour, with very few passengers.

One passenger told Thai PBS that poor publicity about the service, combined with the slow speed of the electric boats,may discourage bus commuters from switching.

The contract for a private company to operate this route is due to expire in September 2025.

Another boat service, operated by the BMA, was the 5km Khlong Phadung Kasem route from Hua Lamphong station to Thewarat Market, which was launched in November 2020 and ended in September last year.

The service, which proved unpopular among bus commuters,has not run since and no private company has shown interest in operating the service.

Informed city administration sources said that the BMA will review the project as to whether it should be scrapped or continued.