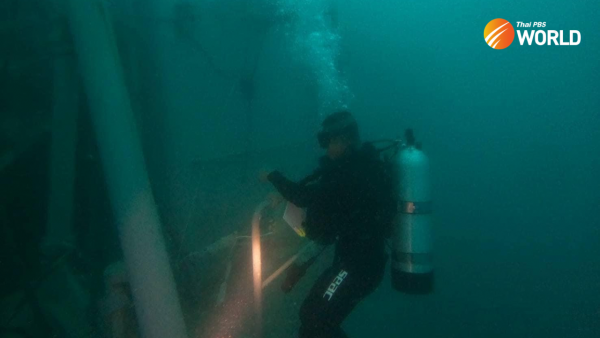 The Royal Thai Navy (RTN) is to call for bids from private companies, specialised in recovering sunken ships, to salvage HTMS Sukhothai, which foundered in rough seas off Bang Saphan district of Prachuap Khiri Khan on December 18th.

Admiral Adung Phan-iam, commander of the Royal Thai Fleet, said yesterday (Thursday) that naval officers are now engaged in assessing the damage to the corvette-class ship,using many images taken from a submersible, and are developing plans to salvage the sunken ship, before seekingapproval for the salvage operation and budget needed fromAdmiral Choengchai Chomchoengpaet, the RTN’scommander-in-chief.

He said that the Naval Dockyard Department has been tasked with overseeing the salvage operation, adding that he expects a bidding process can be held in 1-2 weeks.

The admiral said that, whether the ship will be repaired or not,after it is salvaged, will depend on the damage to the ship and whether it is worth repairing.

HTMS Sukhothai had a complement of 106 crew, but only 105 were on board when it foundered, with the chief engineer being on leave. 76 crew members were rescued, 24 bodies were recovered and five are still unaccounted for.

The search for the remaining five continues and is now focused on the seas in Mu Ko Ang Thong National Marine Park, off Surat Thani.