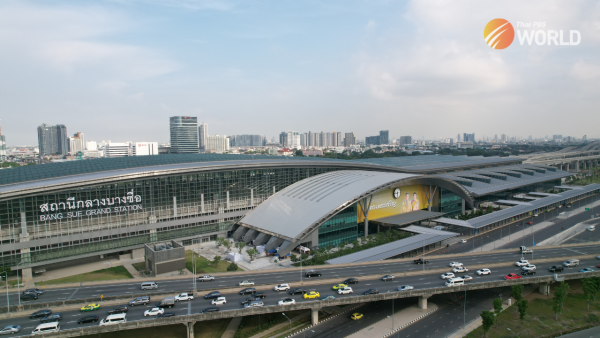 Thailand’s new national rail terminus has run into trouble even before its official unveiling.

Enraged Thai netizens have posted pictures showing how such a large budget could be better spent elsewhere, including to fund the construction of classrooms for a small school.

Amid the growing outcry, Transport Minister Saksayam Chidchob ordered a probe into the State Railway of Thailand (SRT)’s “specific” method of bidding whereby it handed the signboard contract to Uniq Engineering and Construction Plc (UNIQ). The National Anti-Corruption Commission (NACC) has also begun gathering evidence of alleged irregularities in the procurement deal.

“The results of the ministry’s investigation should come within seven days. If they show wrongdoing, the contract will be canceled and culprits punished,” Saksayam said.

Is it too expensive?

Prapas Chongsanguan, a Pheu Thai Party member and former SRT governor, insists the new signboard is too expensive, arguing that it does not use innovative technology while old materials could have been recycled in the new sign.

“I urge relevant parties to look into the [true] cost of the current signboard installation,” he said, without mentioning a figure.

Prominent academic Tongthong Chandransu, meanwhile, said that had relevant officials known the station was waiting for a royally granted name, they could have installed a temporary signboard to avoid wasting state budget.

What is the SRT’s defense?

The SRT has defended its decision to erect new signboards, saying they are needed after His Majesty the King granted an auspicious name to the station in early September in response to a request from the Cabinet. Its new name is the Krung Thep Aphiwat Central Terminal.

According to the state railway operator, the procurement was carried out in line with regulations laid down by the Comptroller General, which oversees government spending. The special procurement method was chosen in this case because the task was urgent.

The SRT plans to host the official launch event for the national rail hub early this year.

It also argued that the contract involves more than just installing the new signboard, as UNIQ must also tackle complicated tasks such as removing the separate letters of the current signboards and putting up new letters in both Thai and English, and changing the glass wall that will be affected by the installation process. The SRT also pointed out that each letter of the new signboard is large and difficult to position high up at the front of the station.

The budget, moreover, covers a one-year warranty, value-added tax, and a lighting system to ensure the name of the terminal is clearly visible from afar.

Ranking as one of Thailand’s four largest constructors, UNIQ is a listed company offering turnkey design services. Along with its large property projects, it has also taken on contracts for public utilities including transport systems. UNIQ is involved in constructing the Red, Green, Blue, Purple, and Orange lines of Bangkok’s urban train system.

It reported its contract for the installation of Bang Sue Grand Station’s new nameplate to the Stock Exchange of Thailand on December 29. The declaration quickly whipped up a storm of controversy that culminated in probes by the ministry and the anti-graft agency.

UNIQ signed 23 contracts with government or state enterprises between 2021 and 2022. The 23 projects have a combined value of more than 134 billion baht.