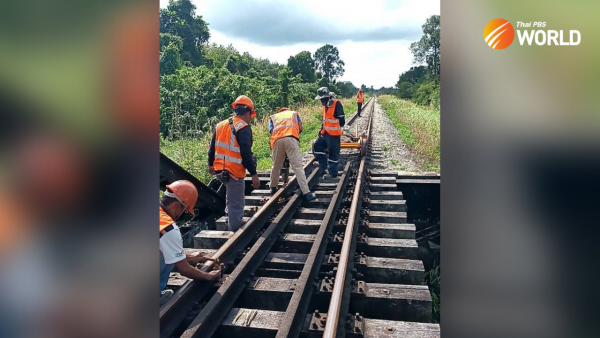 Southern train services, from Hat Yai to Khlong Ngae station in Sadao district of Songkhla, were temporarily suspended after railway officials discovered that many plate screws and five rail sleeper plates had been removed from the track.

Railway officials in Hat Yai alerted security forces and troops and police were dispatched to the scene, at KM942/12-15 in Khlong Ngae village, to investigate.

325 plate screws, which are used to fix the rails to wooden sleepers, and five sleeper plates were found to be missing, leaving the track unsafe for trains.

The train service between Hat Yai and Khlong Ngae resumed in the afternoon, after the completion of repairs.

Last month, a freight train from Hat Yai to Padang Besar border town was struck by an explosive device hidden under the tracks in Sadao district, causing heavy damage to the rail and some cargo containers. A few days later, a second bomb exploded near the scene of the first explosion, killing three railway workers and injuring four others.

Repairs to the damaged rail track and removal of the derailed freight cars were completed a few days before the New Year.