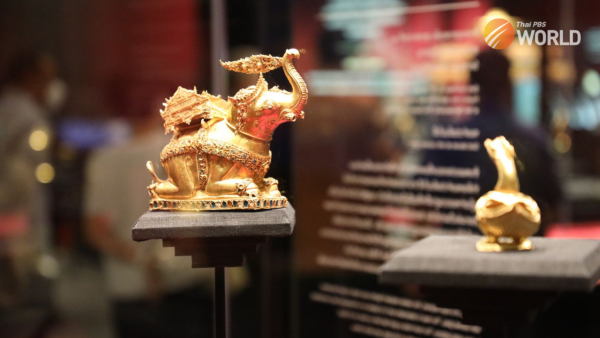 From paper-thin gold sheets of the Buddha to gold swords, head decorations and a crown, the Chao Sam Phraya National Museum in Ayutthaya province, central Thailand, has filled its new Gold Treasure Exhibition Building with 2,244 pieces of gold artefacts and ornaments made around the fifteenth century.

The new exhibition hall is now open to visitors, showcasing 400 years of creativity and the wealth of the former capital city of Siam.

“After five years of construction, the Gold Treasure Exhibition Building will allow visitors to see and learn more about Ayutthaya’s gold treasure, as well as make people aware and proud of Thailand’s cultural heritage,” Phnombootra Chandrajoti, Director General of the Fine Arts Department (FAD), said in his opening address on December 29.

The Gold Treasure Exhibition Building is part of the renovation and remodelling of the Chao Sam Phraya National Museum, the first national museum outside of Bangkok. The museum was founded 63 years ago to house the vast and valuable gold treasure discovered during Thailand’s historic artefact looting.

Without the infamous looting incident in 1956 at Wat Ratchaburana, the Chao Sam Phraya National Museum, let alone the new Gold Treasure Exhibition Building, would not exist.

Wat Ratchaburana, the historic Buddhist temple, is the most popular tourist destination in the Historic City of Ayutthaya – a UNESCO World Heritage Site. The temple was founded by King Borommarachathirat II (also known as Chao Sam Phraya) on the cremation ground of his two ambitious elder brothers – who duelled to theirdeaths in a power struggle to succeed their father.

Following the royal cremation of the late king and his brothers, Chao Sam Phraya constructed the temple and three pagodas on the site to bestow merit and goodness on the departed.

Believing that Buddhism would die out 5,000 years after the Buddha’s death, the king built three secret chambers beneath the main pagoda to serve as a time capsule containing very important messages for future generations.  All the chambers were full of Buddha images, amulets, everyday and ritual items ranging from a kettle to a crown – all made of gold. Whenever the secret chamber was discovered, people of the future would acknowledge that Buddhism once flourished in the ancient kingdom of Ayutthaya.

The great secret of Ayutthaya remained undiscovered for a little more than a half millennium – not long enough to witness the end of Buddhism. In 1956, the secret chambers were discovered by local diggers while searching for amulets.

Local police later nabbed a man wearing a traditional golden crown and wielding a golden sword at the local market. The investigation unveiled the looting of the archaeological site, where more than 100 kilogrammes of gold artefacts and treasures were snatched from Wat Ratchaburana’s secret chambers.

Forget the time capsule and the message about the predicted end of Buddhism. The looters, along with antique dealers and small-time alchemists, stayed up all night melting down invaluable 15th-century golden artefacts into a gold bar. Some golden artefacts, including the golden crown on view at the Philadelphia Museum of Art, were sold on the black market before being resold legally at international auction houses in the west. Less than20 per cent of the gold treasures were recovered.

However, the late King Bhumibol Adulyadej (Rama 9) was the only one able to decipher the message being passed down from the former monarch. He visited the local police station, observed the large number of golden artefacts, and suggested that Ayutthaya required a national museum to house the treasures.

“These treasures should be kept in Ayutthaya province where they were discovered. They should not be taken to other provinces, otherwise it will not match the intention of the creators and the people of Ayutthaya will feel that they own those properties as well,” King Rama 9 was quoted as saying to the local media in 1957.

The Fine Arts Department started raising funds by asking for donations. The donors received an amulet discovered from the secret deep chamber of Wat Ratchaburana. As a result, the Chao Sam Phraya National Museum was established in 1959 – the first national museum outside Bangkok – to house and exhibit the gold treasure found in Ayutthaya.

Designed by FAD’s architects and interior designers in Thai contemporary style, the Gold Treasure Building is appealing to the eye. The new exhibition hall will set a new standard for Thai museums with a smart design and facilities including a lift and wheelchair accessibility to improve the building’s efficiency and comfort.

The gold treasure exhibition has been divided into three sections.

The first gallery is filled with royal regalia and royal gold collections excavated from the secret chambers of Wat Ratchaburana. You will be mesmerized by “Phra Saeng Khan Chaisri”, a golden Sword of Victory, which illustrates how the blacksmith and goldsmith worked hand in hand to craft such a beautiful blade and a bejeweled sheath. The highlights here also include a noblewoman’s golden hat with thread weaving, delicate patterns and encrusted jewels.

The following room examines a large collection of gold figures used in religious and ritual ceremonies. There are gold plaques embossed with the shapes of a horse, cow, fish, turtle, and mythological creatures from Himmaphan, the Hindu mythological forest at the base of Mount Meru. These were once used to make offerings to the Buddha, who is depicted on plaques in a variety of poses, including “pang leela,” or walking. The level of skill required to emboss the imagery on a thin gold plate is astounding. Overall, the gallery is dedicated to Ayutthaya’s wealth and the flourishing of Buddhism in the 15th century.

The third room is less glittery. It depicts the early Ayutthaya Kingdom’s tradition and belief in combining Buddha relics with sacred pagodas.  Visitors will be able to see sacred relics unearthed from historical sites, including the Sri Suriyothai Pagoda.

From riches to the fall

Ayutthaya, now in central Thailand, was the Siamese capital until the 18th century. The city had grown into a thriving metropolis, with a thriving trade and a diverse collection of religious art and artefacts. However, its wealth is less visible than its devastation. Two wars, particularly the most recent, with the mightier kingdom to its west left the city in ruins rather than riches. The discovery of a gold treasure in the deep secret chambers of Wat Ratchaburana and Wat Mahathat attests to the fact that Ayutthaya was a prosperous kingdom.

The new gold treasure exhibition at Chao Sam Phraya National Museum is worth a visit to witness the old kingdom’s wealth and creativity not to mention the stunning beauty of the gold artefacts.

The Chao Sam Phraya National Museum is open Tuesday through Sunday (9am-4pm). Tickets cost Bt30 for locals and Bt150 for foreign tourists. To commemorate the New Year’s Festival, the museum will be open for free from December 30 to January 2.