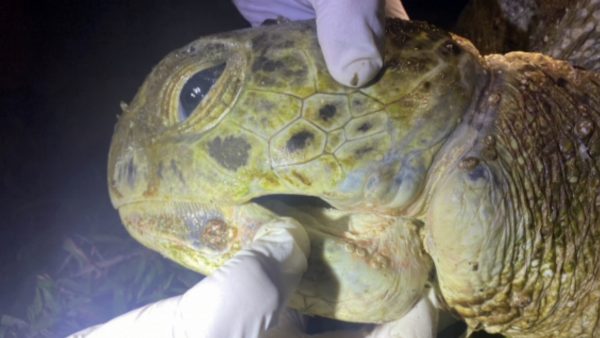 An injured green sea turtle was washed ashore on Pha-ngan Island on Friday night and has subsequently died of the injuries and hunger after veterinarians had tried to save its life.

A voluntary marine species conservation group, called Pha-ngan Sea Guardians, was alerted by villagers to the finding of the turtle on the island’s Chaloklum Beach and rushed to the scene.

They found the turtle unable to move and with a deep woundon its neck, apparently from a rope, and its jaw was broken. The conservationists and officials from the Than Sadet-Pha-ngan national park tried to help the animal, but its condition did not improve. They took it to the research centre in Chumphon, which is better equipped, but it died on the way.

A veterinarian at the centre said that the turtle might have sustained the injury about a month ago, which left it unable to eat as it appeared malnourished. The neck wound was probably infected as well.

The turtle is thought to have been about 30-years-old and weighed 51kg.