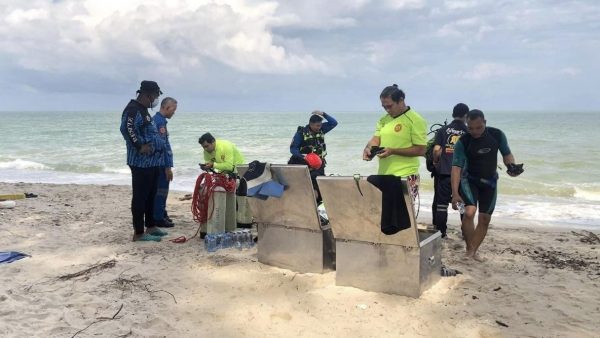 A life guard died yesterday (Saturday) as he tried to save the life of a 10-year girl who had been washed into the sea from the beach in Songkhla province by strong waves. The girl’s body was found washed ashore this morning, near the scene where she went missing.

Rescue teams scoured the sea throughout last night and this morning for Prewwan, who was washed into the sea as she was playing on the beach with two other children.

The girl’s parents spent the whole night waiting on Chalathat Beach, hoping for the safe return of their child. At about 9.40 this morning, the search teams found the body of the girl on the beach and sent to the provincial hospital for identification.

The family had travelled from Yala Province to celebrate the New Year at the beach with relatives.  They allowed their kids to play on the beach as they felt it was safe, but strong waves hit the beach and washed Prewwan into the sea.

36-year-old municipal lifeguard, Sathaporn Mingsuk, was among rescue workers who rushed to the beach after they were alerted about the missing girl at about 1.40pm yesterday.

A few hours later, however, Sathaporn fell unconscious and was rescued by his teammates, who rushed him to the hospital where he was pronounced dead.