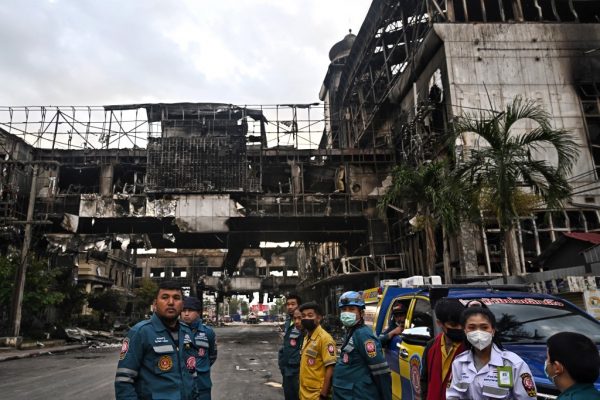 Thai rescue workers stand in front of the destroyed part of the Grand Diamond City hotel-casino after a fire in Poipet on December 30, 2022. – Rescuers scoured through the charred ruins of the Cambodian hotel and casino complex but warned on December 30 they were expecting to find more victims of a deadly fire that forced people to jump from windows. (Photo by Lillian SUWANRUMPHA / AFP)

The casino caught fire early yesterday morning, which reportedly started in the kitchen on the ground floor, where many of the Thai staff were working. It burned for about seven hours before being brought under control with the help of several fire trucks sent from Thailand’s Aranyaprathet district.

The remains of ten Thais, who were recovered earlier, were brought back to Aranyaprathet this morning, to be claimed by their relatives.

The Social Security Office in Bangkok has instructed its officials in Sa Kaeo Province to find out whether any of the dead or injured in the fire in Cambodia’s Poipet township are covered by the social security scheme. Four of the dead were found to be covered, but their remains are still in Cambodia, Social Security Office Secretary-General Boonsong Thapchaiyuth said today.

He also said that the injured, who are covered by the social security scheme, are entitled to receive medical treatment in hospitals free of charge and can claim compensation for loss of income, up to 50% of their salary for up to 90 days, once there is a certification from the hospital doctors of their hospitalisation.