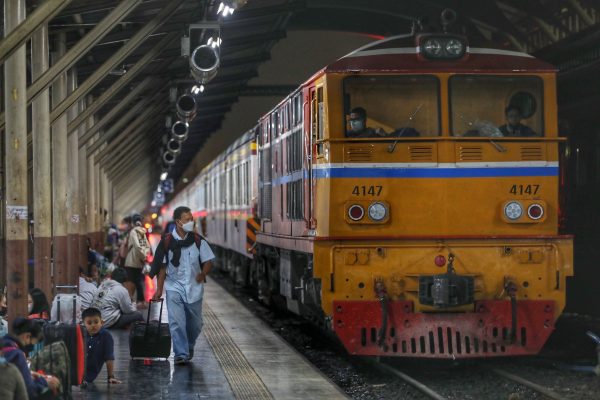 Trains remain a popular mode of transport for many Thai people during the New Year festive period, with about 89,000 passengers using the service on Thursday and about 70,000 today (Friday).

Three additional trains were put into service yesterday, two for the north-eastern route and one for the northern route. More carriages were also added to each train to cope with the number of passengers.

Although the Bang Sue Grand Station has become the main train terminal, many passengers prefer to board trains at the old Hua Lamphong Station, because it is located centrally and is more convenient.

The station was packed with passengers yesterday, with many sitting on the floor of the main hall with their luggage, as they waited to board their trains back home for the New Year celebrations.

One passenger said he prefers the train to buses because it is safer, more convenient and no traffic jams. Moreover, he said that he can enjoy the scenic view along the route.

Phol Wetchakarn, the chief of the operational standards and safety division of the SRT, said that, during the New Year festive season, they have made sure that no passengers are left stranded at stations.

During the 7-day New Year holiday period, from December 29th until January 4th, he said that the SRT is capable of accommodating up to 100,000 passengers a day.

Meanwhile, the state-run Transport Company anticipates that about 43,000 passengers will travel by bus from Bangkok to other provinces today, down from about 60,000 yesterday and the day before.  More than 3,900 bus trips were made yesterday.