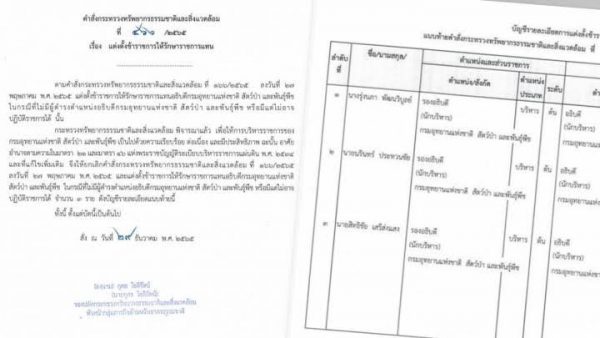 There is a footnote in the appointment order stating that, in case the first acting director-general cannot perform theirduties, the next person in line will take the place.

The appointment of the acting directors-general follows an order by Prime Minister Prayut Chan-o-cha, moving the department’s director-general, Rutchada Suriyakul Na Ayutya, to assist with work in the Prime Minister’s Office at Government House, pending the outcome of an investigation into corruption charges filed against him.

Deputy Prime Minister Wissanu Krea-ngam explained that Rutchada has not been officially transferred out of the department and he is still the director-general.

Officials from the Anti-Corruption Division (ACD) and the National Anti-Corruption Commission raided Rutchada’s office on Tuesday and found about five million baht in cash.

The raid followed a complaint from Chaiwat Limlikhitaksorn, former chief of Kaeng Krachan National Park, claiming that Rutchada had demanded bribes from his subordinates in exchange for not being transferred to rural areas. He also accused Rutchada of demanding money from budgets allocated to operations and expenses for national parks, fire-fighting units and other divisions of the department.

Chaiwat is among about 20 senior officials whose names appear on about envelopes containing cash, allegedly demanded by Rutchada. The envelopes were found in Rutchada’s office during the raid on Tuesday.

All of the people with named envelopes are to be summoned by the ACD for interviews as potential prosecution witnesses.