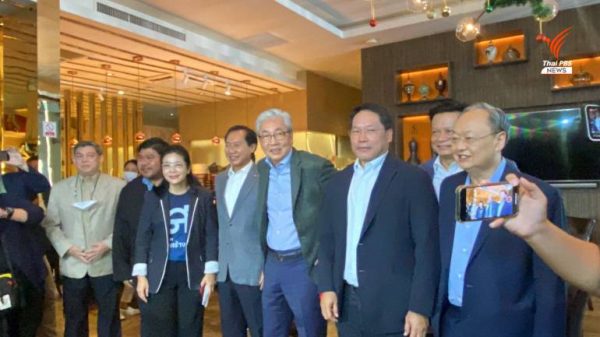 The Sarng Anakot Thai and the Thai Sang Thai parties have agreed to form political alliance, reportedly to find a way out of Thailand’s political quagmire.

The alliance, short of a merger, was announced at a meeting this morning (Thursday), in a Sukhumvit area restaurant in Bangkok, between key members of the two parties, including Somkid Jatusripitak, Uttama Savanayana and Sontirat Sontijirawong of the Sarng Anakot Thai Party and Khunying Sudarat Keyuraphan and Pokin Polakul of the Thai Sang Thai Party.

Khunying Sudarat told the media that she and Dr. Somkid have worked together for more than a decade. She said that Thailand cannot be allowed to continue like this under the current regime, otherwise there will be no future for young Thai people.

She said the Thai Sang Thai and the Sarng Anakot parties decided to join hands to try to find a way out for Thailand, politically, economically and socially.

Dr. Somkid, former deputy prime minister in the Thaksin administration, said that it is about time for the Thai people, himself included, to set aside their differences and work together to solve the pressing problems which have dogged the country for years.

There is no time for a trial of this endeavour, which is to rebuild the country, starting with the building of good parties dedicated to the good of the country, said Dr. Somkid, as he pleaded with the media not asking him about who will be their candidate for the next prime minister, because, he said, this is not an important issue for him.