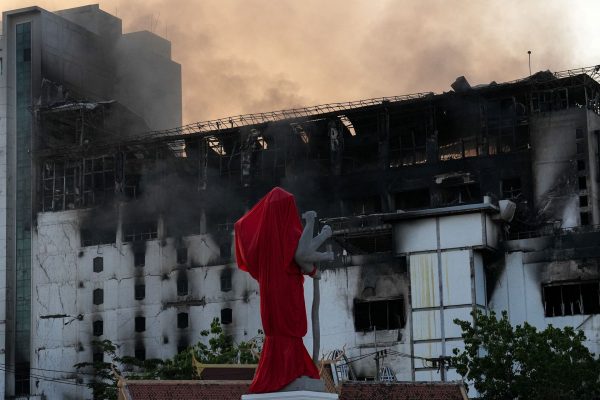 Smoke rises from part of the Grand Diamond City hotel-casino, as Thai and Cambodian rescuers struggle to extricate dozens of people feared trapped after a fire broke, killing at least 10 and injuring dozens in Poipet near Thailand border, Cambodia, December 29, 2022. REUTERS/Athit Perawongmetha

At least 19 people were killed and up to 30 were missing after a huge fire tore through a casino-hotel complex in a Cambodian town on the Thai border, officials said on Thursday.

About 400 employees and patrons were in the Grand Diamond City casino and hotel in the town of Poipet when the fire broke out around midnight, and up to 30 were still missing.

“The number of deaths may reach more than 20,” said Sek Sokhom, head of the Banteay Meanchey provincial information department.

Sixty people had been injured, he said.

Video footage showed the fire under control by Thursday afternoon and a crew in a fire escape stairwell of the building putting on respirator masks and fire-resistant hoods before entering a smoke-filled corridor.

Khieu Sopheak, an interior ministry spokesperson, had earlier said it was not clear how many people were still inside the charred building.

“We don’t know how many are trapped inside and now we are only trying to save lives,” he said, adding that the cause of the fire was still unclear.

A key part of Cambodia’s tourism industry, important for its economy, casinos in the capital of Phnom Penh and on the borders with Vietnam and Thailand are a draw for visitors from Asian nations that ban gambling.

Casinos in Poipet are hugely popular with short-term Thai visitors in particular as gambling is illegal and unlicensed casinos operate underground in the neighbouring country.

At least 25 people were being treated in hospitals in Sa Kaeo province across the border, Thai authorities said.

Provincial authorities said one Thai national had died in hospital and 70% of those affected showed symptoms of smoke inhalation.

It also showed people crowded together with firefighters at a rooftop bar in daylight, shielding their mouths from smoke pouring out of the doors and windows of lower floors.