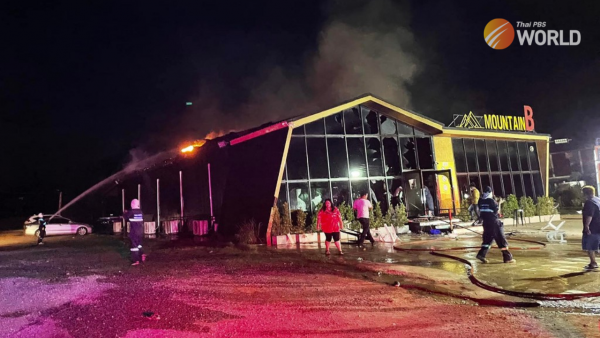 Thailand’s nightlife scene was hit by a tragedy of historic proportions this year when an inferno tore through the Mountain B nightclub in Chon Buri province, killing 26 people and badly injuring at least 40 others.

The fire made headlines for weeks because it was among the deadliest at a night-time venue in Thai history. People who had entered the club expecting an evening of fun and entertainment instead found themselves trapped by a wall of flames and choking black smoke.

On the night of August 4, around 100 people were partying at Mountain B – a new pub in Chon Buri’s Sattahip district – as a band played live on stage.

But their fun night out transformed into a nightmare at about 1am. Revelers noticed sparks in the ceiling, which quickly turned into flames and then raged through the interior. The entire building was gutted in a matter of minutes.

Survivors said they ran for their lives but barely managed to make it out in time. Dozens suffered severe burns, many dying in the proceeding days as the death toll grew larger and larger.

Rescuers found 13 bodies at the scene while two more partygoers succumbed to their injuries a few days later.

More than 40 people sustained third-degree burns and almost half of these were in critical condition.

Over the next few months, the death toll rose to 26, with the last victim succumbing to injuries on October 27.

Many victims were members of the Royal Thai Navy, which has a base in the seaside province.

Mountain B’s owner, Pongsiri Panprasong, offered compensation to families of the deceased, posting receipts of payments made on the club’s Facebook page. The amounts range between 10,000 baht and 73,000 baht with the last payment made to the mother of the 26th victim.

The last post on the Facebook page, on November 19, was to deny rumors that Mountain B had sprung back to life under a new name – NeverNeverland Bar & Bistro.

“It’s not true. Mountain B has been shut down permanently,” the post read.

Pongsiri, aka “Sia B”, claimed he is willing to sell everything he owns to compensate the victims of the fire.

Both Pongsiri, who is in his late 20s, and his father are facing charges of recklessness causing death and injuries and operating an entertainment venue without a license.

The police investigation found that Mountain B was not licensed to operate as a nightclub, lacked fire exits and used highly flammable sound-proofing materials.

The investigation also resulted in transfers for several senior officials, including Chon Buri’s police chief and the Sattahip district chief.

2022: A year stained with the worst mass killing in Thailand’s history

Bussakorn Saensuk, a fire safety expert who chairs the Engineering Institute of Thailand, said the blaze at Mountain B spread so quickly because flammable materials like fiberglass, plastic and foam had been used in the interior decor.

“Entertainment venues that serve large numbers of people should use flame-retardant material or coatings. It may cost more but it’s worth it because it offers greater safety,” she explained. “At the very least, it gives victims time to evacuate.”

Bussakorn said safety rules for entertainment venues were tightened after a fire at the upscale Bangkok nightspot Santika killed more than 60 people during a 2009 New Year countdown party.

However, while more stringent safety rules and building-control laws are in place, operators and the authorities still maintain a casual attitude towards compliance.

The result is that avoidable disasters still take place on a regular basis at nightspots, with victims dying horrible deaths that are entirely preventable.