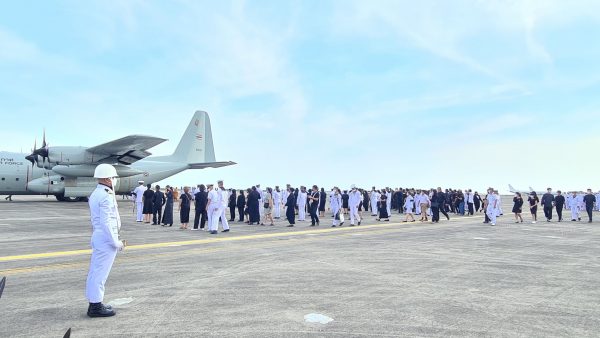 Three more bodies, believed to be those of missing HMTS Sukhothai crew, were recovered from the sea today (Wednesday), according to Royal Thai Navy (RTN) Spokesman Admiral Pokkrong Monthatphalin.

He said that the number of bodies found has increased to 24, with 20 of them in the process of being identified, while the number of crew still missing has dropped to five.

This morning, Vice Admiral Pichai Lorchusakul, commander of the First Naval Area Command, said that one body was found drifting at sea near Samet Island and it was recovered by a Fisheries Department vessel, adding that it is believed to be one of the missing crew because of what he was wearing.

The bodies of ten crew members, who have gone through the identification process, were flown from Prachuap Khiri Khan’s 5th air wing in a C130 transport plane to U-Tapao airbase in Chon Buri Province this afternoon, for a Royally-sponsored bathing rite at the crematorium of the Royal Thai Navy at 5pm.

The religious ceremony was presided over by the RTN commander-in-chief Admiral Choengchai Chomchoengpaet.

Meanwhile, the father of one of a deceased crew member has demanded an apology from the RTN over the tragedy.

Pol Cpt Somboon Esa, the father of Petty Officer Second Class Saharath, said he would like to hear the word “sorry” from naval officer or officers over the ship’s loss and the deaths of many crew members, including his son.

He said that there are several questions which are yet to be answered.

Somboon also said that, for the past several days, the commander of the First Naval Area Command, Vice Admiral Pichai Lorchusakul, has been the only naval officer to giveupdates on the search operations on daily basis, despite the fact that he was not on the ill-fated ship.

“The person who knows the most about what happened to the ship is its captain. I would like to hear from him, even though I have already forgiven him,” said Somboon.