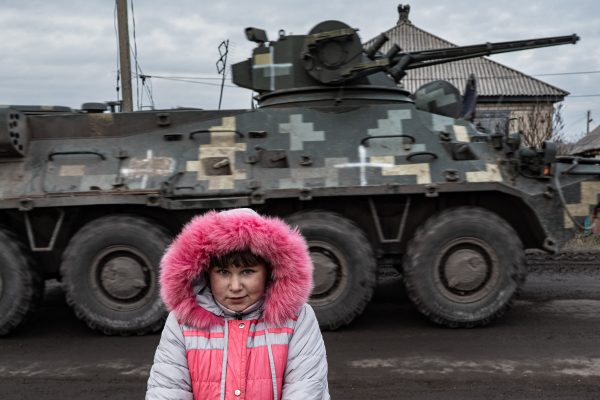 Lisa Shtanko, 8-year-old, looks on as a military vehicle passes behind in front of her house in the city of Lyman, eastern Ukraine on December 23, 2022. / AFP

Talk about peace has intensified since the visit of Ukraine’s President Volodymyr Zelensky to Washington DC last week. At the same time, Russian President Vladimir Putin has said his country is ready for talks. Yet, the two leaders are not talking to each other. Their messages about a possible peace dialogue came through others.

Both sides have said time and time again that they are ready to negotiate, but on their own terms. Ukraine has made it clear that the Russian troops must have withdrawn from all Ukrainian territory. Russia insists that a ceasefire can be achieved only if Kyiv meets its demands. These positions will be very difficult to meet.

What is clear is that winter is here and civilians and soldiers in Ukraine are suffering. Already, more than 8 million people in various parts of Ukraine have no electricity or water and are also lacking in other daily necessities. Therefore, this winter will be a harsh one. It is the time for peace talks. Each side has to yield to create a conducive atmosphere for talks. Neither has.

Then, out of the blue, Russia’s Foreign Minister Sergei Lavrov issued an ultimatum, saying that either Kyiv meets Moscow’s demands or the issue would be decided by the army. What he meant was that there would be more missiles targeting key structures inside Ukraine. Lavrov’s words were contrary to those of his boss. So, is Russia sending mixed signals to the world or simply staging a PR stunt?

Of late, Ukraine has been bolstered by additional aid from the US. President Joe Biden has given Patriot Missiles to Ukraine, to protect itself from incoming missiles. The US has, so far, supported Ukraine to the tune of some US$55 billion, which is considered a huge sum of money given the current state of the US economy.

Ways must be found to get both leaders’ intentions to converge and materialise in ways that could suspend the war for a while. The US would be a key player, as well the other members of NATO. Otherwise, both sides will continue to suffer and the war would intensify. It could even worsen and possibly end up as a nuclear war.

When the Republicans take over the lower House next month, there could be some change in the US policy towards Ukraine. After more than 300 days of fighting, there is no decisive military victory by either side, only a human calamity.

It is hoped that the leaders of this conflict will come to their senses and realise that the sooner they suspend the fighting the better. After all, Ukraine and Russia are blood brothers, so it is senseless to continue to fight.