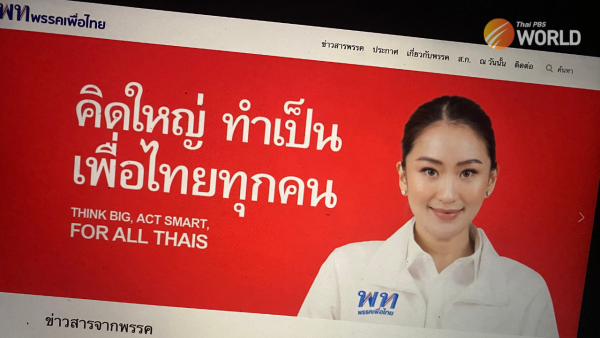 The opposition Pheu Thai Party is gearing up for the general election in 2023 by showcasing Paetongtarn Shinawatra, the youngest daughter of its patriarch Thaksin, and is expected to announce her as its prime ministerial candidate.

By backing his daughter to play a leading role in his proxy party, former PM and convicted fugitive Thaksin has signalled that he has no plans to wash his hands of politics. Thaksin has lived in self-imposed exile overseas since 2008, when he fled the country shortly before being sentenced to two years in jail by the Supreme Court for abusing his power while in office.

Pheu Thai has been busy holding events across the country in recent months, to introduce key party figures and would-be election candidates to local voters.

Following an eight-year hiatus, Pheu Thai appears confident of returning to power after the government it led was ousted by a military coup in May 2014.

An extraordinary party meeting in early December saw Paetongtarn unveil Pheu Thai’s “Think Big, Act Smart, For All Thais” campaign, with promises to raise the daily minimum wage to 600 baht and the minimum monthly salary for new graduates to 25,000 baht.

Addressing southern residents during a Nakhon Si Thammarat rally in early December, Paetongtarn said Pheu Thai would also work hard to raise the prices of rubber, oil palm and rice to support farmers. She also vowed to promote the tourism and fisheries sectors, replace single-track with double-track railways, and complete a high-speed railway to connect Thailand with China and Singapore.

Paetongtarn and Pheu Thai have both topped recent surveys of eligible voters, well ahead of Prime Minister Prayut Chan-o-cha and the Ruam Thai Sang Chart (United Thai Nation) Party. Prayut announced last week that he would be the new party’s PM candidate in the next election.

A poll by the National Institute of Development Administration (NIDA), released on December 25, found that 34% of respondents wanted Paetongtarn to become the next prime minister, compared with 14% for Prayut and 13.2% for Pita Limjaroenrat, leader of the opposition Move Forward Party.

Pheu Thai also topped a NIDA survey released on December 6, which asked respondents which party they thought had the highest chance of becoming the ruling party after the next election. Less popular choices were Move Forward, Palang Pracharath, Ruam Thai Sang Chart, Bhumjaithai, and the Democrats.

2022 review: Prayut not ready to say goodbye despite toughest year as PM

Thaksin’s daughter serves as “head of the Pheu Thai Family” — a position apparently created specifically for her — in addition to the party’s chief adviser for innovation and public participation.

Most observers expect Pheu Thai to nominate her as its PM candidate in the next election, due sometime in the next few months. Property tycoon Srettha Thavisin is tipped to become the party’s second PM candidate but it remains unclear if Pheu Thai leader Chonlanan will be its third candidate.

Srettha, president and chief executive of Thailand’s leading real-estate developer Sansiri Plc, has declined to rule out the possibility of standing as a Pheu Thai PM candidate and recently confirmed his loyalty to the party. “I am with Pheu Thai”, he wrote in November in answer to a Twitter follower.

Both Paetongtarn, 36, and Srettha, 59, are viewed as strong candidates for PM. Some analysts reckon Thaksin’s daughter is the better choice, at least for Pheu Thai and its politicians, who are loyal to the former premier.

“Paetongtarn is [a proxy of] Thaksin. Nominating his daughter as a PM candidate may give party politicians who are considering defection a cause to rethink. It could even lure defectors back to the party,” said Yuthaporn Issarachai, a political scientist from Sukhothai Thammathirat Open University. “Paetongtarn’s nomination could convince them that Thaksin is fully behind the party [as it contests the next election]. And that would intensify backing from party supporters.”

Other observers may think Srettha is the better choice, arguing that he could distance the party from Thaksin and the Shinawatra family. But Yuthaporn said Srettha is unlikely to do so while running under the Pheu Thai banner.