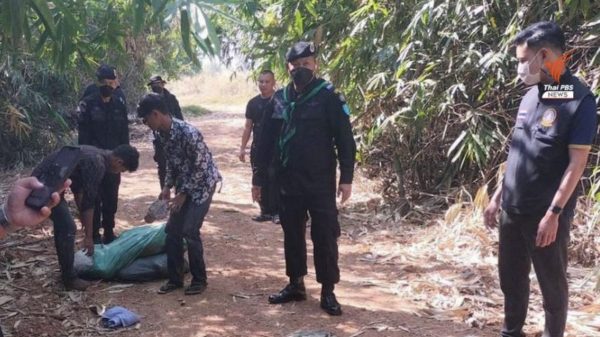 Two Cambodian men were arrested near the Thai-Cambodian border in Aranyaprathet district of Sa Kaeo province, after they smuggled about 1.1 tonnes of pork, worth about 137,000 baht, into Thailand.

Acting on information received, a combined team of customs and livestock officials and border troops was dispatched to Ban Nong Ian in Tha Kham sub-district, close to the Cambodian border, to investigate.

On approaching a shelter, they found two men about to transfer some bags, which were found to contain frozen pork, into the structure. Both were arrested and charged with smuggling banned meat into the country.

According to Customs Department’s statistics, about 174 tonnes of frozen pork, worth about 35 million baht, have been smuggled into Thailand from neighbouring countries andseized since July this year.

All the meat has been buried in landfills, to prevent the possible spread of African Swine Fever.