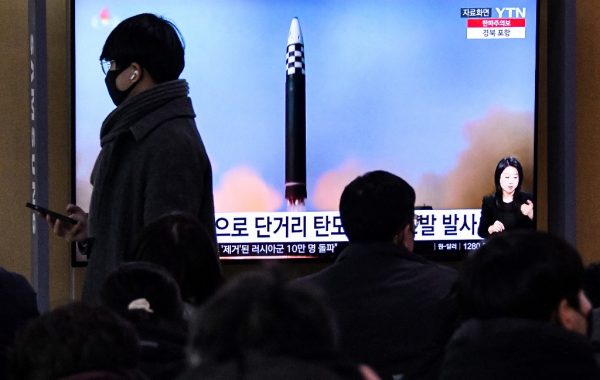 (AFP) – South Korea accused the North of flying “several” drones across their shared border on Monday, prompting Seoul’s military to deploy warplanes and fire warning shots to ward them off.

“Our military first detected a North Korean unmanned aerial vehicle around the Gimpo airspace at 10:25 am (0125 GMT),” the Joint Chiefs of Staff (JCS) said in a statement.

The military did not indicate whether the objects had been shot down, or had gone back over the border, one of the most heavily-fortified locations in the world.

But Yonhap reported that South Korean warplanes were trying to shoot down the drones, some of which reached airspace near the capital Seoul.

Flights were temporarily suspended at Gimpo and Incheon international airports — the country’s two major hubs — for about an hour at the request of the JCS, according to Yonhap, which cited an official from South Korea’s transport ministry.

Yang Moo-jin, a professor at the University of North Korean Studies in Seoul, said the incident marked the first time that South Korean flights were suspended over “the appearance of North Korean drones”, adding they were likely for spying purposes.

“Considering North Korea’s poor level of drone development, there is little possibility that they carry the drone attack capabilities used in modern warfare,” he added.

“It is speculated that they came over to our area as part of reconnaissance training during the recent winter training.”

The incursion is the first time in five years that North Korean drones have invaded South Korean airspace and comes as Pyongyang has carried out an unprecedented blitz of weapons tests this year, including the launch of its most powerful intercontinental ballistic missile yet.

Last week, Pyongyang also fired two short-range ballistic missiles and claimed to have developed new capabilities to take images from space, saying it would be ready to launch a reconnaissance satellite by April next year.

The North’s drone operations are a growing security concern in Seoul, but Pyongyang has denied any involvement and accused South Korea of fabricating evidence.

In 2017, Seoul’s military fired warning shots at a flying object that entered the country’s airspace from North Korea across the Demilitarised Zone.

A year earlier, South Korean soldiers fired warning shots at a suspected North Korean drone that crossed the western part of the border, the most sensitive part of the Demilitarised Zone.

In September 2015, South Korea triggered an anti-aircraft warning and sent an attack helicopter and fighter jet to track down a drone that crossed the border, without success.

In 2014, a South Korean fisherman found the wreckage of a North Korean drone in his net near a frontline island south of the rivals’ disputed Yellow Sea border.