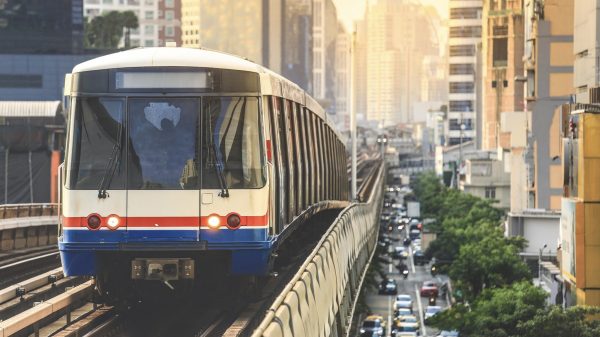 BTS Group Holdings Plc. (BTS) is demanding that the Bangkok Metropolitan Administration (BMA) settle the about 40 billion baht in debt it owes to the company over the operation of the second extension of the Green Line train project.

The company released a 124 second video clip yesterday (Monday) of an interview with its chairman, Keeree Kanjanapas, appealing to the BMA and the government to settle the 3-year-old debt. He said the debt was incurredduring company’s investment in the installation of systems for the extension and its subsequent operation.

There are two extensions to the Green Line and the infrastructure construction was undertaken by the Mass Rapid Transit Authority of Thailand, under the jurisdiction of Ministry of Transport.

Train fares on the two extensions have not been collected by BTS since the commencement of the services, due to legal problems and disagreements over the fares.

Keeree said that the company has been charged interest, on daily basis, by its creditor banks on money borrowed for investment in the project, but the company has not ceasedoperating the train service because the public would be adversely affected.

Meanwhile, Bangkok Governor Chadchart Sittipunt assured that the debt owed by the city administration will definitely be settled, but it must be done according to the proper legal process.

He noted that there are still unresolved legal issues, namelywhether the contract to hire BTS to install the operatingsystem and operate the second extension was approved by the City Council.

He said he has sought an answer from the City Council, adding that, if not, then something must be done to solve the problem, which may mean that a new contract would need to be signed between BTS and the BMA.

The governor also said that the BMA will find out whether the transfer of the infrastructure of the second extension to the BMA has been approved by the City Council, because the city administration will have to pay the MRT for the infrastructure.