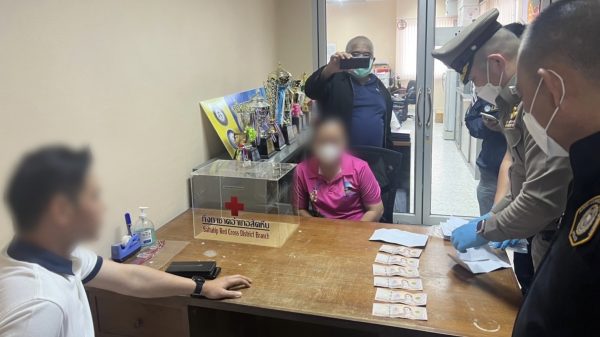 An assistant chief officer and a local administration official in Sattahip District of Chon Buri province were caught on Friday allegedly taking a bribe from a guesthouse operator, in exchange for granting a license to operate.

The operator of the Pool Villa guesthouse lodged a complaint with anti-corruption police claiming that, when he recently applied for a license for his guesthouse at the Sattahip District Office, he was told that if he wants the license quickly he has to make a cash donation by putting money in an envelope and dropping it into a Red Cross Society donation box.

He claimed that he had to pay 15,000 baht for each unit in his guesthouse and that the donation box did not belong to the Red Cross Society, but was mocked up by the extortion gang to give the impression that the cash was not bribe money but a donation.

A sting operation was then planned, with undercover police and officials from the Government Sector Anti-Corruption Commission sent to the district office to stake it out.

The guesthouse operator showed up at the office and placedan envelope containing cash into the donation box. The envelope was subsequently collected by a local administration official, identified as “Suphaporn”, who handed it over to the assistant district chief officer, identified as “Kanthapong”.

The undercover officials approached Kanthapong and Suphaporn and arrested them on charges of malfeasance in office.

Both suspects have denied that they took a bribe from the guesthouse operator.