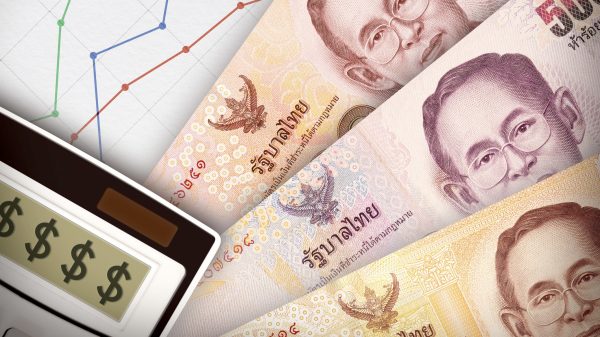 Thailand’s Fiscal Policy Office has adjusted the economic growth projection for this year to 3.4%, down from 3.5%, due to a slowdown in private investment, from a projection of 5.7% to 5.1%, because of raw material price increases.

The office forecasts, however, that the growth projection for next year will be increased to 3.8%, due to the anticipated return of Chinese tourists in the second half of the year.

Improvement in the tourism sector, as a result of the easing of travel restrictions, saw more tourists visiting Thailand, with the number of foreign arrivals for the first nine months of this year registered at 5.7 million, which is expected to increase to 10.2 million by year’s end, instead of 8 million as previously forecast, said the office.

Tourist arrivals for next year are forecast to increase to 21.5 million, generating an estimated 1.04 trillion baht in revenue.

Local consumption in the private sector is forecast to grow by 7.9% for the whole year, compared to 7.4%-8.4% as earlier predicted, thanks to the economic stimulus packages rolled out by the Government. Revenues in the farming sector arealso projected to increase by 7.4%.

Export growth projection is set at 8.1% this year, before it is expected to fall to about 2.5% next year. Imports are projected to grow by 16.6%, before an expected contraction to 3.0%next year, resulting in Thailand enjoying a trade surplus of US$23.6 billion this year and US$22.8 billion next year, said the office.

Inflation for the whole of this year is forecast to be 6.2%, but it is expected to reduce to about 2.9% next year.

The Fiscal Policy Office said that the baht currency will remain weak, at an average of 36.68 baht per US dollar,compared to an average of 35.60 baht this year.